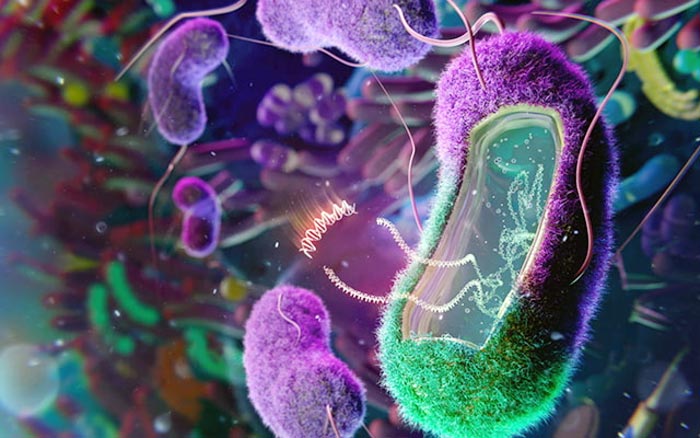 An artist’s rendering of the concept of re-engineered native bacteria that serve as chassis to introduce therapeutics into the gut microbiome to treat or cure disease.
Credit: Thom Leach, Amoeba Studios

Development of effective live bacterial therapeutics may depend more on using and re-introducing native microbes that can stick around than how the microbes are modified.

Residing within the human gut are trillions of bacteria and other microorganisms that can impact a variety of chronic human ailments, including obesity, type 2 diabetes, atherosclerosis, cancer, non-alcoholic fatty liver disease and inflammatory bowel disease.

Numerous diseases are associated with imbalance or dysfunction in gut microbiome. Even in diseases that don’t involve the microbiome, gut microflora provide an important point of access that allows modification of many physiological systems.

Modifying to remedy, perhaps even cure these conditions, has generated substantial interest, leading to the development of live bacterial therapeutics (LBTs). One idea behind LBTs is to engineer bacterial hosts, or chassis, to produce therapeutics able to repair or restore healthy microbial function and diversity.

Existing efforts have primarily focused on using probiotic bacterial strains from the Bacteroides or Lactobacillus families or Escherichia coli that have been used for decades in the lab. However, these efforts have largely fallen short because engineered bacteria introduced into the gut generally do not survive what is fundamentally a hostile environment.

The inability to engraft or even survive in the gut requires frequent re-administration of these bacterial strains and often produces inconsistent effects or no effect at all. The phenomenon is perhaps most apparent in individuals who take probiotics, where these beneficial bacteria are unable to compete with the individual’s native microorganisms and largely disappear quickly.

“The lack of engraftment severely limits the use of LBTs for chronic conditions for curative effect or to study specific functions in the gut microbiome,” said Amir Zarrinpar, MD, PhD, assistant professor of medicine at UC San Diego School of Medicine and a gastroenterologist at UC San Diego Health. “Published human trials using engineered LBTs have demonstrated safety, but still need to demonstrate reversal of disease. We believe this may be due to problems with colonization.”

In a proof-of-concept study, published in the August 4, 2022, online issue of Cell, Zarrinpar and colleagues at University of California San Diego School of Medicine report overcoming that hurdle by employing native bacteria in mice as the chassis for delivering transgenes capable of inducing persistent and potentially even curative therapeutic changes in the gut and reversing disease pathologies.

Using this method, the group found they can provide long-term therapy in a mouse model of type 2 diabetes.

“In theory, native bacteria are already maximally adapted to the luminal environment,” Zarrinpar said. “Thereby bypassing nearly all the barriers to engraftment and making them an ideal chassis for therapeutic delivery.”

In the study, the research team showed that they can take a strain of E. coli native to the host and engineer it to express transgenes that affect its physiology, such as blood glucose levels. The modified native bacteria were then reintroduced into the mouse’s gut.

After a single treatment, Zarrinpar said the engineered native bacteria engrafted throughout the gut for the lifetime of the treated mice, retained functionality and induced improved blood glucose response for months. The researchers also demonstrated that similar bacterial engineering can be done in human native E. coli.

“This work is an exciting step in demonstrating that live bacterial therapeutics can be used for treating or possibly even curing chronic conditions,” said the study’s first author Baylee Russell, now a graduate student at Harvard University.

“In principle, live bacterial therapeutics may be a relatively non-invasive, low risk and cost-effective option for treating a number of diseases. It is worthy of additional exploration. There’s still a lot of work that needs to be done, but it will be exciting to see this technology expand in the years ahead.”

Zarrinpar said the reluctance by some groups to use undomesticated native bacteria rather than well-known laboratory strains is driven by the assumption that they are difficult to culture and modify, although the study authors note recent studies have demonstrated they can be modified more consistently using newer methods.

“None of the individual steps we used or described are particularly difficult, but in combination, they are novel. Together, they clearly demonstrate that we can accomplish what has yet to be achieved with other synthetic biology approaches,” said Zarrinpar. “That is, functional manipulation of the luminal gut environment to create persistent physiological effects.”