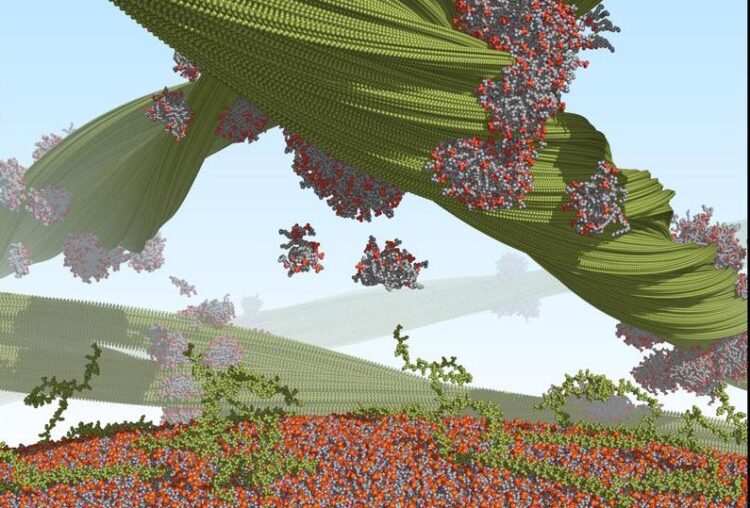 After Alzheimer’s, Parkinson’s is the most common neurodegenerative disease in the world. More than six million people worldwide suffer from it. In this disease, alpha-synuclein proteins form thread-like structures called fibrils. When these fibrils clump together, they probably damage nerve cells. A research team has now shown for the first time how lipids bind to the fibril surface and influence the arrangement of the synuclein proteins within the fibrils. As it demonstrated, the drug candidate anle138b binds into a tube-shaped hole inside such a lipidic fibril. The researchers’ findings could open new approaches to diagnosing and treating Parkinson’s disease.

It is a disease with many faces: In the progressive stage of Parkinson’s, limbs begin to tremble, muscles become stiff, movements slow down. In some cases, cognitive disorders or depression occur. There is currently no cure for Parkinson’s, nor for the related diseases Lewy body dementia and multisystem atrophy where alpha-synuclein fibrils also appear.

Conspicuous deposits in the brain

A striking feature of Parkinson’s disease is clumps of alpha-synuclein protein in the brain. Like other proteins, alpha-synuclein consists of long chains of amino acids that must fold correctly in three dimensions to fulfil their functions. In the wrong shape, they can ‘stack up’ into highly ordered fibrils. The fibrils, in turn, can form even larger aggregates. Scientists suspect that the accumulation of misfolded alpha-synuclein protein impairs the function of nerve cells and contributes to their death.

In its correct folding, however, alpha-synuclein is indispensable for nerve cells. It binds to lipid membranes and is involved in transporting vesicles and releasing the messenger substances they carry in nerve cells. “However, lipids also appear to interact with misfolded alpha-synucleins,” reports Gunnar Schröder, group leader at Forschungszentrum Jülich and professor at Heinrich Heine University Düsseldorf. “It has long been suspected that interactions between lipids and misfolded alpha-synuclein proteins could play a role in the development of Parkinson’s disease. But so far, we know very little about this relation,” explains Bert de Groot, research group leader at the Göttingen Max PIanck Institute (MPI) for Multidisciplinary Sciences.

The scientists have now been able to close this knowledge gap. Using cryo-electron microscopy, they succeeded in visualizing for the first time how lipid molecules bind to the fibril surface and connect the units with each other. By using sophisticated computer simulations combined with solid-state nuclear magnetic resonance spectroscopy, the team was also able to show how the lipid and protein elements interact within fibrils.
Surprisingly, several completely novel fibrils formed in the presence of lipids. “Our findings underline that we need to study alpha-synuclein fibrils also in the presence of lipids if we want to understand the molecular basis of alpha-synuclein related pathologies,” Max Planck Director Christian Griesinger comments.

“The promising drug candidate anle138b also binds to lipidic alpha-synuclein structures. The drug attaches to the tubular cavities within the lipidic fibril,” says Loren Andreas, research group leader at the MPI. “We also find such cavities in other proteins that misfold and are associated with neurodegenerative diseases, for example the tau and the prion protein. The exciting question for us now is whether anle138b attaches there in a similar way and could therefore also provide a diagnostic and therapeutic approach for such diseases.”

Anle138b was developed in 2013 by Griesinger’s team together with Armin Giese and his colleagues from Ludwig Maximilians University in Munich. In tests on mice, the compound successfully delays the progression of Parkinson’s disease. It is currently being further developed by MODAG AG in collaboration with the company Teva. In a clinical phase I study, it proved to be tolerable for humans, which enables further ongoing clinical trials.