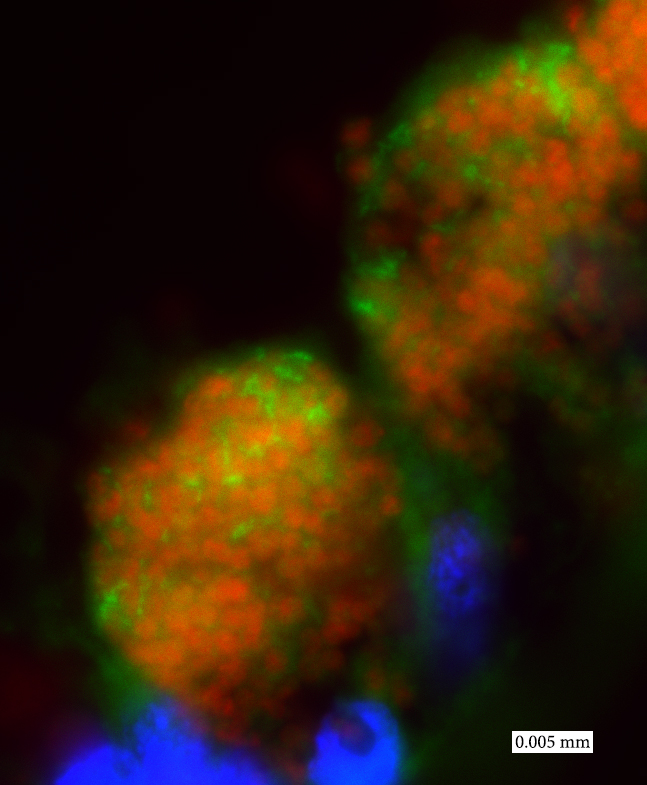 Colourful display of the symbiosis: Within cells in the gills of a Bathymodiolus mussel (cell nuclei in blue), Cycloclasticus (green) reside next to larger methane-oxidizing bacteria (red). Max Planck Institute for Marine Microbiology, Bremen

Stench and heat when a road is paved, black tar clumps at the beach that stick to your feet – asphalt does not make for a homey habitat. And yet it forms the basis for a flourishing ecosystem of mussels, crabs, worms, sponges and many other animals.

In the depths of the Gulf of Mexico, oil and tar seep from the ocean floor and form bizarre structures reminiscent of cooled lava – so-called asphalt volcanoes. Researchers from Bremen, Germany, and the USA discovered these volcanoes nearly 15 years ago. These exotic environments still have many surprises in store, such as the one shown now in a study published in Nature Microbiology by an international research group led by Maxim Rubin-Blum and Nicole Dubilier from the Max Planck Institute for Marine Microbiology in Bremen, Germany.

Symbiotic bacteria use a novel source of energy and carbon

The Campeche Knolls asphalt volcanoes at about 3,000 meters water depth in the Gulf of Mexico are home to a thriving biological community. But what do these organisms live from?

“They can’t eat the asphalt or oil and other food sources are rare in the deep sea,” explains Rubin-Blum. “However, some animals have established a symbiotic relationship with bacteria, and some of these symbionts can extract energy as well as carbon from the oil.” Marine researchers have long known of such bacteria in other oil-rich environments – but they are free-living microorganisms that do not live in symbiosis.

These oil-degrading bacteria belong to the genus Cycloclasticus. Their name means “ringbreaker,” and describes their ability to degrade oil by breaking hard-to-crack ring structures in oil. These aromatic compounds (called polycyclic aromatic hydrocarbons or PAHs) are highly toxic for most organisms, and degrading them is an arduous process that costs a lot of energy.

The symbiotic Cycloclasticus that the Bremen researchers discovered in mussels and sponges from the asphalt volcanoes no longer bother with degrading PAHs. They have made life easier for themselves by specializing on the oil’s easily degradable compounds – natural gases such as butane, ethane, and propane, called short-chain alkanes. “These microorganisms no longer degrade PAH,” explains Rubin-Blum, “because they have lost the genes they need to do this .” This is the first discovery of Cycloclasticus bacteria that can no longer degrade PAH and instead gain all their energy and carbon from short-chain alkanes.

Because the short-chain alkanes are so easy to use, many microorganisms compete for them. How can these symbiotic bacteria rely on such fiercely contested compounds and why did they give up their ability to live on PAH?

“We think that they can only afford this ‘luxury’ because of their symbiosis with mussels and sponges,” explains Nicole Dubilier from the Bremen Max Planck Institute. “These hosts provide the symbiotic Cycloclasticus with a continuous supply of short-chain alkanes through their constant filtering of the surrounding seawater. By living inside animals, these symbionts are well taken care of and do not have to compete with free-living bacteria.”

“This is the first time a symbiosis based on short-chain alkanes has been described,” Rubin-Blum adds. This study thus extends the range of known substances that can power chemosynthetic symbioses.

Rubin-Blum, Dubilier and their colleagues compared the genomes of the symbiotic bacteria with closely-related free-living species of Cycloclasticus. These bloomed in large numbers in the Gulf of Mexico after the Deepwater Horizon oil catastrophe. They were excited to discover that some free-living Cycloclasticus can also degrade short-chain alkanes.

“That was surprising as until now it was thought that Cycloclasticus could only live from PAHs,” explains Dubilier. Short-chain alkanes are mainly found in the early stages of an oil spill and are quickly used up by free-living microorganisms. In contrast to the symbiotic Cycloclasticus, however, their free-living relatives are still able to use PAHs. “This allows them to remain flexible. When the short-chain morsels are gone, they can still degrade the considerably tougher PAHs,” says Dubilier.

“Cycloclasticus is clearly a key player in marine oil degradation,” adds Rubin-Blum. “That is why we now plan to compare the physiology and metabolism of symbiotic and free-living Cycloclasticus in more detail to learn more about how they contribute to the degradation of hydrocarbons in the oceans.”

or the press office