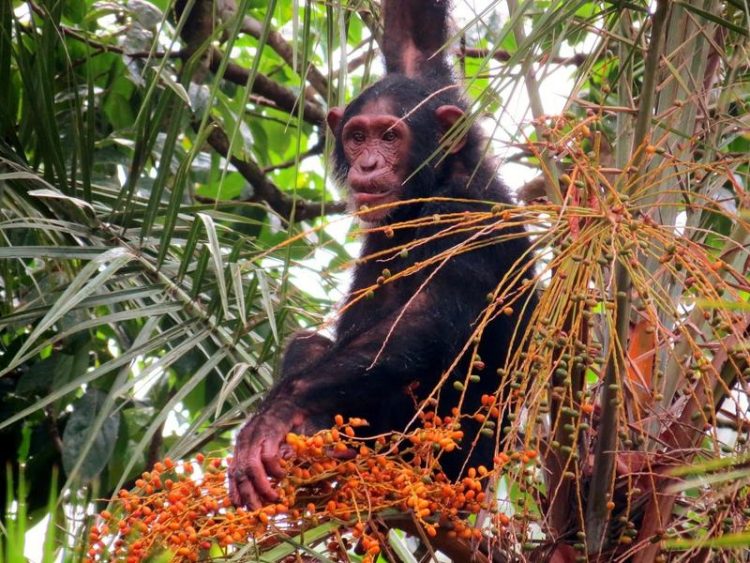 In our retina, three kinds of receptors are responsible for the perception of basic colours: red, green and blue. The same holds true for many primate species – in contrast to all other mammals. For nocturnal species, the ability to distinguish different colours would not provide a significant advantage.

It is therefore highly probable that so-called trichromatic vision developed in diurnal primates. In addition to greens and blues, they can also distinguish shades of red, making it easier to detect coloured fruit.

This could provide a competitive advantage over other fruit-eating animals that cannot distinguish red from green. While this idea had been tested experimentally in a few species, it remained largely unexplored on a larger scale.

A team of researchers from iDiv, UL and UvA has now shown that trichromatic vision in primates is strongly linked to the availability of conspicuous, red palm fruits. Their research involved analysing data on the colour vision and distribution of more than 400 primate species as well as fruit colour data for over 1700 palm species.

The result was clear: trichromatic vision in primates is most common in African countries with a high proportion of palm species with very colourful, conspicuous fruits.

This relationship is a win-win situation, benefiting both primates and palms: while primates rely on palm fruits as their primary food source, they are also important seed dispersers in tropical forests, particularly for large fruits. The research shows that the number of diurnal, fruit-eating primates in Africa increases with the proportion of conspicuous palm fruits, with a peak in subtropical regions.

The results suggest that the effects of palm fruits on primates are strongest in the transition zones of arid to subtropical regions, where competition for food is also high. For the African primates, the ability to see several colours is thus an advantage when foraging. Palms, in turn, evolved colourful fruits that could be easily spotted by the primates, thus helping to disperse their seed.

The researchers did not only analyse data from the African continent, but also from Asia and the Americas. “Interestingly, in the Americas and Asia some primate species have trichromatic vision, whereas others do not. Here, we did not identify a relationship between colour vision and the proportion of conspicuous palm fruits,” said first author Dr Renske Onstein from iDiv and UL.

Furthermore, most primates in the Americas prefer palm fruits with non-conspicuous colours. By contrast, many trichromatic primates in Asia have no interest whatsoever in a fruit’s colour – they enjoy feeding on large amounts of fruit in general.

“In Asia and the Americas, birds and bats could play a more important role as seed dispersers than primates,” explained Dr Daniel Kissling from UvA, senior author of the study. “In contrast, there are relatively few frugivorous birds on the African continent, so palm species may rely more on primates as seed dispersers than other fruit-eating animals.”

The analyses show that palm species in Africa are dominated by those with conspicuous fruits, whereas the fruits of American species tend to be more inconspicuous.

Many primate species are now threatened with extinction due to rapid habitat loss and global changes. This may have cascading effects, especially when some plant species rely on primates as their primary seed dispersers.

Thus, conservation efforts should also take plant-animal interactions and fruit-colour diversity into account as this is crucial for maintaining tropical biodiversity.