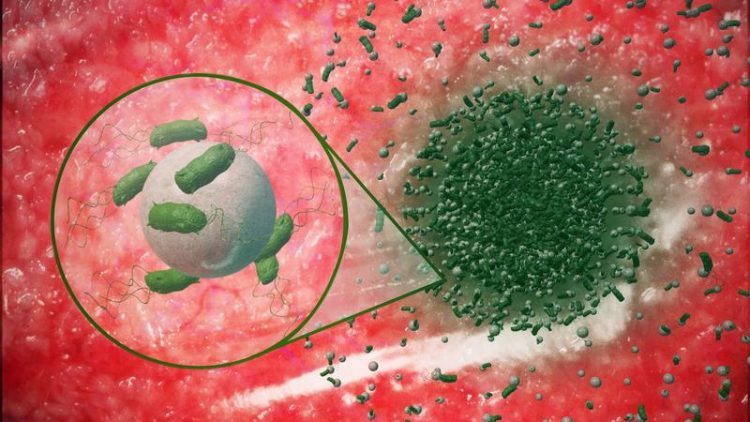 Swarm of biohybrid systems, composed of flagellated bacteria attached to microparti-cles, navigate through stagnant fluids such as inside the eye, the spinal cord, the brain, or the urinary tract. Dr. Metin Sitti

If things go according to Metin Sitti, director of the Physical Intelligence Department at the Max Planck Institute for Intelligent Systems in Stuttgart, with the help of biohybrid microrobots targeting therapy for example within stagnant fluids inside the human body such as inside the eye, spinal cord fluid, brain lobes, or urinary tract could in the foreseeable future come close to reality.

The little helpers would accurately home-in on targets in the body, releasing a significant amount on drug precisely at the wished target location, without stressing the rest of the human body with side effects that this medication could potentially generate.

That this dream based on the Fantastic Voyage could come true in the near future is strengthened by recent scientific outcomes, published in Scientific Reports (Nature) this month. Researchers from the Carnegie Mellon University in Pittsburgh, USA and the Max Planck Institute for Intelligent Systems in Stuttgart have shown recently that flagellated bacteria attached to a large number of microparticles can carry the microsystem as a swarm to the desired target.

Maintaining an appropriate environment, like optimal pH level or non-polluted surrounding is essential for the survival of most microorganisms like bacteria, and they have developed sensing and propelling behaviors to move away from “un-wished or bad” environments. Flagellated bacteria such as E. coli or S. marcescens move self-propelled towards a desired pH level, which is called pH-taxis.

Scientist now take advantage out of these “natural” properties and link bacteria (bio-component) to artificial components like microparticles, to create swarms of biohybrid microrobots with a size of 1 to 5 micron (micron = 1/1000 mm), which can be manufac-tured fast at low costs.

“The bacteria serves as the sensor and actuator, while the microparticle is loaded with a specific cargo, like a drug that is intended to be delivered to a specific target location, “ explains Dr. Metin Sitti, director at the Max Planck Institute for Intelligent Systems in Stuttgart.

Given the pH-tactic response of a specific bacterial strain and knowing that cancerous tumors have a lower pH compared to that of periphery normal tissue, the use of a microrobotic system for targeted drug delivery application by pH-taxis seems to be attractive.

Until now, it has been unclear whether a specific number of bacteria (mostly in the range of 1 to 10), all stochastically linked to the same microparticle, would move as a group in the same direction, without releasing the particle. And even if a swarm consis-ting of several thousand copies of these biohybrid systems would manage to do so. A team of international researchers have now shown this kind of “swarm movement” of biohybrid microrobots for the first time, examined in water-like fluids, which serve as model fluids for non-floating liquor like naturally present in spinal cord fluid, brain lobes, eye, and urinary tract of the human body.

Since the bacteria strains used for the biohybrid systems are not pathogenic for human and the complete biobybrid microrobot will degrade afterwards, no burden has to be expected for the body.

One restriction of this bacteria-propelled microrobots may be the limited distance they can swim. External guidance will be needed to get the device most of the way to its destination fast. One obvious strategy for guiding a robot to the right spot fast is to add magnetic micro/nanoparticles to its synthetic body and to steer it externally with mag-nets.

Magnetic steering would take the microrobots fast to the target region coarsely, and turning off the magnetic field would allow cell-based steering using pH-taxis to reach to the target region finely. When arrived at the target location, the drug cargo needs to be released, either actively or passively. The passive way could be that the drug itself responds on pH and will be released automatically at the preferred pH value. The active release could be achieved by remote heating of metallic nanocomponents and hydrogel body of the robot, which would trigger the drug release.

Further steps might be to genetically modify bacteria in terms of their preferred pH value or to improve their motility. Within the human body, lots of helpful bacteria are resident, for example various strains of bacteria in the intestinal mucosa are necessary for the physiological digestion.

“In all of these experiments, safety aspects are of main importance for us”, states Dr. Metin Sitti. “The bacteria and the artificial component of the biohybrid microrobot are carefully selected and engineered, to avoid any toxic effect or other negative immune response when injected into any living system in the future.”