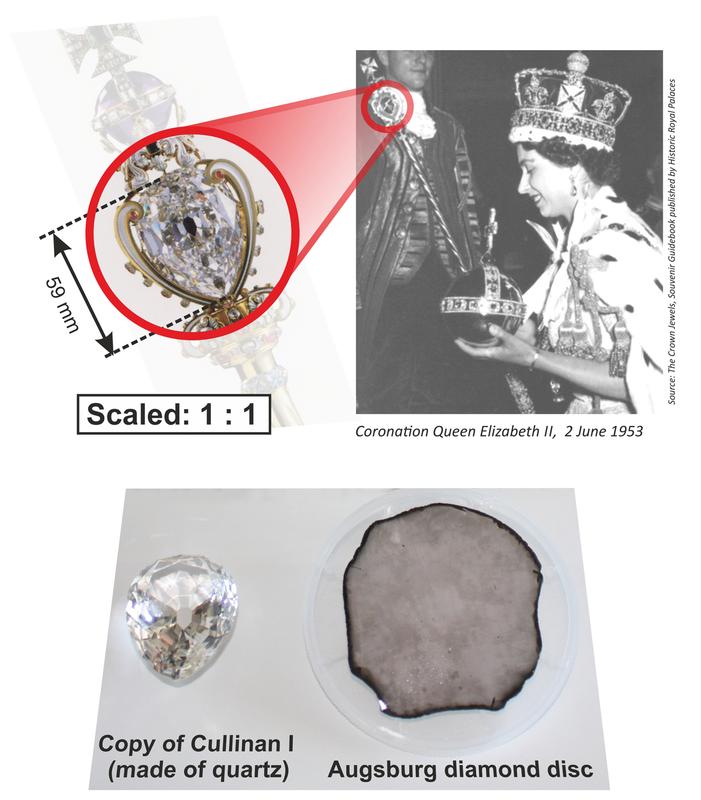 A single crystal diamond disc, which even compares favourably to the Queen’s crown jewels when it comes to sample area. © University of Augsburg/IfP/EP IV

After 25 years of intensive research, physicists at the University of Augsburg have succeeded in the synthesis of a single crystal diamond disc, which even compares favourably to the Queen’s crown jewels when it comes to sample area. In the renowned magazine Scientific Report they reported on their spectacular results and the long journey that has led to this success.

“Are these real diamonds?” Diamond researchers are often confronted with this question when they talk about their work with the uninitiated. Natural diamonds = “real” diamonds, synthetic diamonds = “fake” diamonds – this is a wide-spread notion, and it is far from the reality for physicists.

When comparing the crystal structures, they identify that the natural diamonds and those created in a lab are identical. The only signs of natural or synthetic origins are characteristic defects on an atomic level, which both possess.

Work on researching and synthesising diamonds has been carried out at the University of Augsburg since 1991. The main goal of this research is to understand the different physical and chemical processes occuring during crystal growth.

Whereas nature applies immense pressure and temperatures to transform graphite into diamond, work in the laboratories in Augsburg is carried out with chemical vapour deposition at low pressure at a few tenths of an atmosphere. Under specific process conditions, hydrocarbon molecules are deposited on the surface from the gas phase, allowing diamond crystals to grow layer by layer.

From randomly orientated crystallites to a large single crystal

What sounds easy at first is actually quite straight forward – at least if you are only producing layers of randomly orientated crystals. “When we set up our first CVD reactor and the manufacturer company came to put it into operation, the first run had already provided a covering layer made up of diamond crystals with a decent structural quality,” says Dr. Matthias Schreck, who has led the diamond work group at the Augsburg chair for Experimental Physics IV since the beginning.

“Unfortunately,” Schreck continues, “at the time, the edges of the individual particles did not fit together, so it was not possible to produce a single crystal covering a large area. We committed ourselves to solving this problem completely in the following 25 years.”

After the precious metal iridium was identified as the most suitable growth substrate and an efficient process for the formation of orientated crystals had been found, all other challenges were addressed step by step in order to approach the goal of monocrystalline layers – or wafers as the scientists call it. Dr. Stefan Gsell and Dr. Martin Fischer are responsible for the considerable progress. Both did their PhDs on this subject and have been driving this work for over ten years that has now lead to this significant breakthrough.

“It was fascinating to open the reactor after several days of growth under several thousand degrees of hot plasma discharge and to take out first large area single crystal wafer samples,” Gsell describes. After removing the growth substrate, the quality of the layer can be assessed in terms of transparency and perfection: “When we first made a transparent sample without any cracks and weighing over 20 grams, which is over 100 carats, it was even more fascinating,” adds Fischer.

In the latest issue of the international scientific journal Scientific Reports, the Augsburg researchers describe in detail a sample like this a diamond with a maximum diameter of 92 mm and a weight of 155 carats for the first time. The article also provides an explanation for the unusual phenomena that occur exclusively during the formation of diamond nuclei on iridium. “These phenomena have already been consistently described in dozens of publications by scientists worldwide, but it has only now been possible to develop a model that explains all our observations in a consistent way,” says Schreck.

The three scientists are also convinced of the technological benefit of their development. In November 2015 they founded Augsburg Diamond Technology GmbH (www.audiatec.de) together. As CEOs of the young startup, Fischer and Gsell continue to drive the technological development and are trying to ensure that the Augsburg diamonds find commercial application in different technology fields. These range from cutting tools for the machining of high-end surfaces with a reflective surface and optical components to detectors at large particle research facilities, such as the European Nuclear Research Centre CERN in Geneva. Two crystals from Augsburg were recently installed there for measurements in the accelerator ring.

The Augsburg wafers could also contribute to successfully producing more of our energy from renewable sources. “Since the beginning of my work at the University of Augsburg, I constantly hear among the diamond community that diamond is the ultimate material for high-performance electronics, as it is needed for upgrades to modern power grids”, Schreck remarks, and adds that he even uses this argument a great deal himself. However, no one has been able to produce any competitive components just yet. A group of European research teams have joined forces to form the “GreenDiamond” network in order to make progress in this field. There are also plans for similar projects in the USA. Only recently, two workshops in Washington and in Hasselt, Belgium, highlighted the fact that the maximum size of the single crystals available so far – typically less than 25 mm – was a major stumbling block. This is why the successful progress in synthesising the crystals was welcomed as good news.

Larger surface than the Cullinan I

Can the single crystals from Augsburg measure up to the big diamonds cut from natural crystals? The most well-known of these is the Cullinan I, also known as the Great Star of Africa. It is kept under lock and key in the Tower of London, and it adorns the sceptre of the crown jewels. With a to-scale quartz copy of this unique cut diamond in his hands, Schreck compares its size with the Augsburg diamond disc and observes: “with its weight of 532 carats, the Cullinan I is far ahead of us, and this will probably not change for a long time. However, in terms of sample area, we are already in front!”