Home / Interdisciplinary Research / The highest human freefall from the stratosphere
16.04.2002

The highest human freefall from the stratosphere 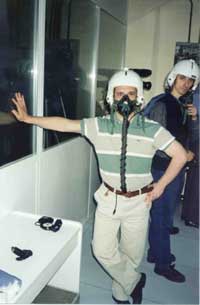 Testing the connection of the mask to guarantee maximum denitrification

A team of researchers from the Universitat Autònoma de Barcelona, in coordination with the Instituto Nacional de Técnica Aerospacial Esteban Terradas (INTA – Esteban Terradas National Institute of Aerospace Technology), is preparing for a person to jump from an altitude of 38,000 metres, on the edge of the stratosphere. This will be the highest altitude from which anybody has ever jumped, allowing for the first ever studies of human behaviour in such an extreme situation.

Parachutist Miguel Angel García, from the Para-Sport S.A parachuting consultancy, is preparing for this immense jump under the control of a team of scientists from the UAB and INTA directed by Enric Domingo, professor at the Medical Physiology Unit of the Department of Cellular Biology, Physiology and Immunology at the UAB and a doctor in the Cardiology Service at the Vall d’Hebron Hospital (Barcelona); in collaboration with the researchers Santiago Estaún, Joan López-Moliner and Ramón Cladellas of the Basic Psychology Unit at the Department of Education Psychology at the UAB, along with researchers Miquel Àngel Piera and Jordi Serra of the Simgrup Simulation Centre in the UAB’s Department of Telecommunication and Engineering Systems.

Using virtual-fall simulation conditions developed by the UAB’s Simgrup Simulation Centre, the researchers have carried out both medical and psychological assessments of the parachutist who will be making the jump, so as to verify his speed and abilities when faced with the need to take crucial decisions. Thanks to the collaboration of the Spanish Air Force (EADA), the parachutist has also made real preparatory jumps at the Zaragoza Military Base from altitudes of 3480 m, 3500 m and 5350 m.

The research forms part of the ICARO project, financed by the Programa Nacional de Investigación Espacial (National Programme of Space Investigation – Special Action ESP98-0519-E) in collaboration with the Fundació Empresa i Ciència (Business and Science Foundation) at the UAB itself, a project that investigates human behaviour in extreme situations. The researchers are now seeking funding for the preliminary phases and the definitive jump, which will need both private and public support.

The last time a jump like this was attempted was on August 16th 1960, when the US aviation coronel J.W.Kittinger successfully jumped from an altitude of 32,000 metres. However, lack of detailed analysis for that jump practically renders it redundant as a scientific experiment. Since Kittinger’s jump, two civilian jumps, also in the United States, ended in the deaths of both parachutists due to the depressurising of their equipment.

This type of jump is particularly outstanding because it brings a human being so close to the limits of the stratosphere, where environmental conditions (which include, among other things, the reduction of atmospheric pressure and oxygen levels, temperatures of around 50 degrees below zero, falling at high speed, distorted vision as a result of the lack of oxygen, and excessive luminosity and radiation) are very different to those of commercial aviation, or even those conditions faced by military aviation and missions in space. Such a jump requires both adequate equipment (pressurised and thermal gear, strong solar protection, etc.) and training, and the parachutists has to meet certain special physical and personal requisites.

Conditions most similar to this jump in which the behaviour of the human body has previously been studied have either been those at above 38,000 metres, such as studies undertaken by astronauts in orbit, or those below such an altitude, such as military personnel studied at altitudes of around 10,000 metres.

This study is not only interesting from the point of view of its applications to aerospace, but also because it will provide information on the physiological and psychological adaptation of human beings when confronted by high-stress situations, as a result of the loss of senses, mobility and the restricted vision suffered throughout the fall. This research will be of particular importance to the training of personnel who need to confront high-stress situations. These include aviation pilots, fire-fighters, police and members of other organisations providing emergency aid. The study will also be important for the training of athletes involved in extreme sports such as Formula 1, ski jumping and motorbike races. Additionally, the simulation tools developed by the UAB researchers will prove useful to projects researching road and rail safety.