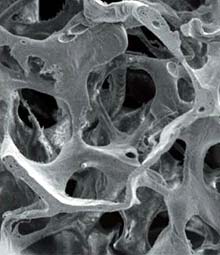 University of Toronto scientists have developed a biodegradable scaffold, similar in structure to a dish sponge, that significantly speeds the rate of bone healing.

The material, developed by an interdisciplinary team with expertise in engineering, biology, chemistry and dentistry, provides a building scaffold for bone growth. The scaffold, which eventually dissolves, increases healing rates and offers a potential new treatment for bone loss in cases such as trauma or spinal fusions.

“We have been successful in stimulating cell and tissue growth in the laboratory and animal models and in replacing bone with bone-the underlying principle of bone tissue engineering,” says co-investigator Molly Shoichet, a professor of chemical engineering and applied chemistry at the Institute for Biomaterials and Biomedical Engineering (IBBME). The study appears in the June 15 issue of the Journal of Biomedical Materials Research Part A.

Bone automatically replaces itself, allowing healing of injuries such as fractures. But in some traumatic cases, there is too much damage for the bone to heal on its own. Bone grafting, or moving bone from one body part to another, is a common solution in fields such as orthopedics or dentistry, says IBBME co-investigator Professor John Davies. “The problem is that there’s often not enough of the patient’s bone to move from one site to another, so you’ve got to resort to other means of generating bone,” he says.

Davies, Shoichet, Jeff Fialkov, a surgeon at Sunnybrook and Women’s College Health Sciences Centre, and graduate student Chantal Holy started experimenting in 1995 with polymers and natural bone tissue to find a new method of bone regeneration. They developed a biodegradable scaffold with polymers similar to those found in dissolving sutures and with a structure similar to a large-pored dishwashing sponge. The size of the pores is critical, says Davies. “When you put material like this in the body, the host tissue can grow into these areas very rapidly and very efficiently.”

The researchers point out that their technique does not require the use of expensive chemicals called bone growth factors used to stimulate bone growth.

The team now plans to study the scaffolds in larger animals, with the ultimate goal of creating a human treatment that could speed the early healing of bone trauma. “When people are treated in hospitals, they want medicines or therapies that can get them up and going as quickly as possible,” says Davies. “It’s not only better for the patient, but it gets the patient out of their bed and out of the hospital soon so there’s less cost to the health care system.”

The study was funded by the Canadian Institutes of Health Research, the Ontario Research and Development Challenge Fund, BoneTec Corp. and the Physician’s Services’ Incorporated Foundation.