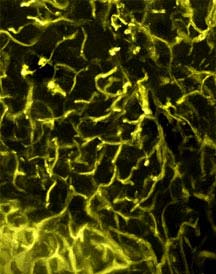 Tiny blood vessels, viewed beneath a mouse’s skin with a newly developed application of multiphoton microscopy, appear so bright and vivid in high-resolution images that researchers can see the vessel walls ripple with each heartbeat — 640 times a minute.

The capillaries are illuminated in unprecedented detail using fluorescence imaging labels, which are molecule-size nanocrystals called quantum dots circulating through the bloodstream. Quantum dots are microscopic metal or semiconductor boxes (in this case cadmium selenide-zinc sulfide) that hold a certain number of electrons and, thus, have a wide number of potential applications in electronics and photonics.

Writing in the latest issue of the journal Science (May 30, 2003), researchers at Cornell University and a nanocrystal manufacturer, Quantum Dot Corp., report that the nanocrystals are particularly useful for producing high-resolution, three-dimensional images inside living.

“We have demonstrated a new approach to using quantum dots for biological studies of living animals,” says Watt W. Webb, Cornell’s S.B. Eckert Professor of Engineering and professor of applied physics, co-inventor of multiphoton microscopy (with Winfried Denk) and leader of the experimental imaging team at Cornell.

“Of course, there are easier ways to take a mouse’s pulse,” says Webb’s Cornell collaborator, senior research associate Warren R. Zipfel, “but this kind of resolution and high signal-to-noise illustrates how useful multiphoton microscopy with quantum dots can become, in a biological research context, for tracking cells and visualizing tissue structures deep inside living animals.”

Zipfel cited the study of vascular changes in cancer tumors as one possible application, cautioning that the Cornell researchers are not ready to recommend human-medicine clinical applications for quantum dot imaging, in part because some of the best fluorescing nanocrystals have unknown toxicity. However, mice used in the Cornell study are still alive and apparently healthy, months later, and are being monitored for long-term effects of their treatments.The Cornell researchers used quantum dots for fluorescence imaging microscopy because when excited by light, they emit bright fluorescence in different colors, according to their size, reports biophysics graduate student Daniel Larson. The quantum dots were 6 to 10 nanometers in diameter. (A nanometer is one one-billionth of a meter. By comparison, a red blood cell, at 7 millionths of a meter, is a thousand times bigger). “Even with their water-soluble coating, which is something like being encased in a soap bubble, the quantum dots are only about 24 nanometers in diameter,” Larson notes.

Webb explains that the laser scanning microscope used in multiphoton microscopy is particularly adept at producing high-resolution, three-dimensional images inside living tissue because it combines the energies of two photons, striking a molecule at the same time, with an additive effect. Under the conditions used, this only occurs at the focus of the laser, so only at that point is the molecule excited to a state that results in fluorescence emission. This excitation is the same as if it arose from the absorption of a single photon of higher energy, but it is three-dimensionally localized since it is only occurring at the beam focus. The scanning microscope moves the laser beam across the area being imaged at a precise depth. When repeated scans at different planes of focus are “stacked,” the result is a brightly lit and vividly detailed three-dimensional image — and video that takes a viewer inside a living organism..

Because of the special properties of the nanoparticles, multiphoton microscopy with quantum-dot imaging can be 1,000 times brighter in tissue than conventional organic fluorophores (the chemical labels that are temporarily added to samples), says Webb. “We looked to quantum dots for even brighter images at better resolution, and that’s what we found.”

Results presented in the Science report show highly detailed images of capillaries beneath the skin of a living mouse after quantum dots were injected through a vein in its tail, as well as capillaries through the adipose (fat) layer around the mouse’s ovaries. The researchers were particularly surprised at the saw-toothed ripples in the walls of one capillary image — until they made a calculation. Noting the time it took to scan that part of the tiny blood vessel and the animal’s heart rate during the experiment, they determined that each ripple represented the undulation of the capillary wall from one heartbeat.

Besides demonstrating the feasibility of microscopic angiography with quantum-dot labeling through skin and adipose tissue — two of the most challenging tissue types — the researchers said they had resolved several fundamental questions, including the fact that sometimes as many as half the dots in a preparation are not fluorescent.