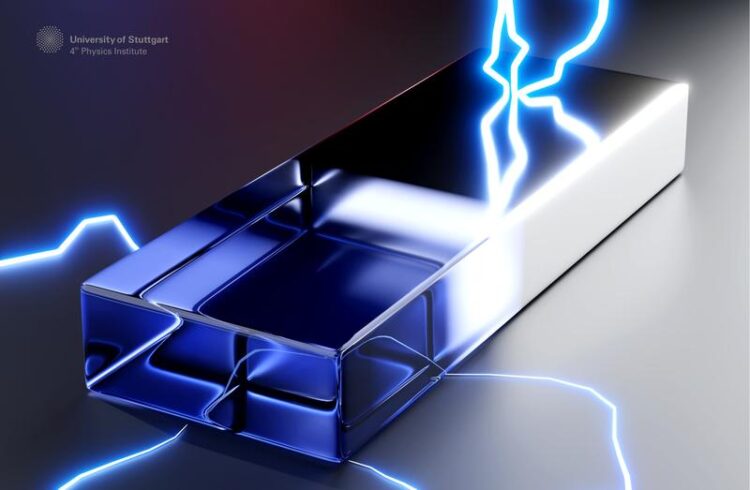 Image symbolizing electrically switchable nanoantennas. The part of the nanoantenna with the lightning from top looks metallic, with metallic luster when it is electrically charged.
(c) Julian Karst / University of Stuttgart

Video conferencing played a key role during the Covid-19 pandemic and is set to dominate many meetings in the future. To realize the true feeling of a face-to-face dialog, three dimensional video is required and yet the holographic technology is still missing. Researchers at the University of Stuttgart in Germany have now introduced a completely new approach to realize such dynamic holographic displays, based on electrically switchable plasmonic nanoantennas made from conductive metallic polymers. This key element provides the missing technology to enable holographic displays at video rate, which would enable virtual conferences with a “real-life” feeling.

Holograms creating impressive three-dimensional static images are well known. Dynamic holograms switchable at video rates using data from a high-speed internet connection are not possible until now. Previously, the limiting factor was the display resolution. Holographic images require a resolution of 50 000 dpi (pixels per inch) which is 100x more than the best smartphone displays. For such a resolution one has to reduce the pixel size to half a micrometer (one thousands of a millimeter). However, current liquid-crystal technology does not allow for such small pixels, being limited to a few micrometers pixel size.

Researchers at the University of Stuttgart have succeeded in breaking this fundamental barrier. In an interdisciplinary collaboration between Physics and Chemistry, they developed the idea to use electrically switchable plasmonic nanoantennas with dimensions of only a few hundred nanometers and made from conductive polymers.

For several years, researchers had created metasurfaces that generate static 3-dimensional holograms. However, their components, or nanoantennas, consisted of metals such as gold or aluminum that could not be switched like common liquid crystal materials. After searching for several years for the right material, PhD student Julian Karst and nanophotonics expert Dr. Mario Hentschel from the group of Prof. Harald Giessen, together with polymer chemist Prof. Sabine Ludwigs and her team, identified electrically conducting polymers as possible candidates for switchable plasmonics. Sabine Ludwigs contributed her expertise on electrochemical switching of such functional polymers, that were at the focus of the 2000 Chemistry Nobel Prize.

Until now such materials had mostly been used for current transport in flexible displays and solar cells. In collaboration with cleanroom head Monika Ubl, Karst and Hentschel developed a process to nanostructure the metallic polymers using a combination of electron beam lithography and etching, thereby creating the plasmonic nanoantennas. The team showed that the optical appearance of the nanoantennas could be switched between that of a shiny metal and a transparent material by applying a voltage between minus and plus one volt. This switching effect works even at video rates of 30 Hertz. Despite being only a few tens of nanometers thick and less than 400 nanometers in size, the nanoantennas do the same job as the much larger and thicker liquid crystals used in current state-of-the-art technology. These new devices reach the required pixel densities of about 50.000 dpi.

Karst created a simple hologram metasurface from the nanoantennas that could deflect an infrared laser beam 10 degrees onto one side by applying a voltage. Currently, he is working on making this deflection available for many angles for applications in LIDAR devices in autonomous vehicles, of keen interest to the automotive industry. Additionally, Karst created a hologram that behaves like an optical lens, which can be turned on and off by simply applying ±1 Volt. This technology is crucial for future smartphone cameras or optical sensors that could be zoomed from wide angle to telephoto by switching the applied voltage. Currently, up to four lenses are required for this functionality.

In the future, Prof. Harald Giessen and his team aim to address every single pixel individually, to dynamically change the holograms at will at video rates. Also, the optical properties of the polymer nanoantennas have to be shifted into the visible wavelength range, which requires collaborations with chemists and material scientists. Together with engineers, integrated and dynamically switchable optical displays and the first moving holograms could be integrated into AR/VR goggles and eventually onto smartphone screens and even televisions.

Taking Moore’s law for display technology, this advance by about a factor of 100 could happen commercially around the year 2035.