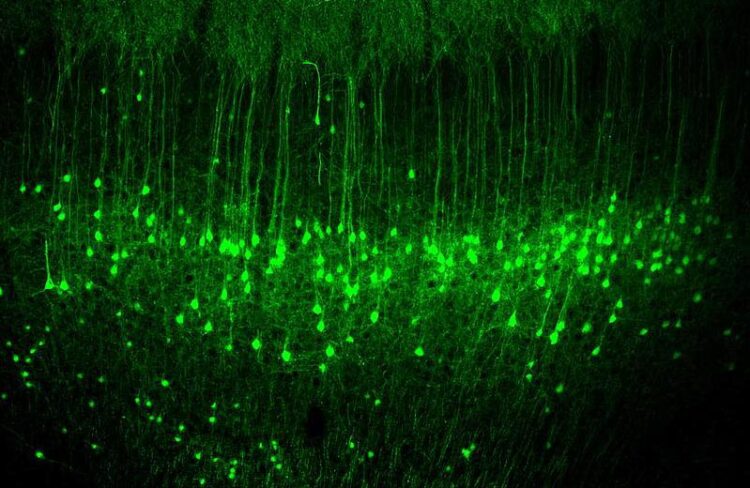 Neurons from layer 5 of the motor cortex stained with a fluorescent dye.
Ilka Diester / University of Freiburg

An interdisciplinary research team at the University of Freiburg has found important clues about the functioning of the sensorimotor cortex. The new findings on neuronal activities in this brain area could be helpful for the further development and use of so-called neuroprostheses. These have an interface with the nervous system and are intended to help compensate for neuronal dysfunctions. “Our results will contribute to the improvement of neuroprosthetic approaches while shortening the training period of patients with prostheses,” says neurobiologist Prof. Dr. Ilka Diester from the Faculty of Biology at the University of Freiburg. The results have just been published in the journal Nature Communications.

The research project also involved the working groups of computer scientist Prof. Dr. Thomas Brox from the University of Freiburg and neuroscientist Prof. Dr. Daniel Durstewitz from the Central Institute of Mental Health in Mannheim. The team found evidence of conserved structures of neuronal activity in the sensorimotor cortex of freely moving rats. The electrophysiological recordings across the entire bilateral sensorimotor cortex allow conclusions about the respective contributions of the premotor, motor and sensory areas. In particular, the researchers found a clear gradient for a contralateral bias, i.e. for movements of the opposite half of the body, from anterior to posterior regions.

Previous findings on sensorimotor cortex are mostly based on highly constrained, stereotyped movements in a laboratory setting. The current work uses recordings on freely moving subjects using 3D tracking and addresses the question of the transferability of knowledge about neural control of movements from constrained behavior to a freely moving condition, a prerequisite for understanding the brain under more natural conditions as well as for the further development of neuroprosthetic devices.

Categories of behavior across individuals

The team used a dimensionality reduction and neural data alignment method. Thus, the high-dimensional neuronal patterns were reduced to a low-dimensional representation by means of their similarity to other patterns, resulting in geometric structures in the visual representation. These geometric patterns were then automatically aligned with each other, similar to the image of holding a magnet to a pack of nails. These then align themselves in a certain direction. Based on such aligned geometric structures, the researchers were able to decipher behavioral categories across recording sessions and even across individuals, and find corresponding evidence of conserved structures of neural activity.

Overview of facts:
• Original publication: Melbaum, S., Russo, E., Eriksson, D., Schneider, A., Durstewitz, D., Brox, Th., Diester, I., Conserved structures of neural activity in sensorimotor cortex of freely moving rats allow cross-subject decoding. Nature Communications 13, 7420 (2022). DOI: doi.org/10.1038/s41467-022-35115-6
• The work is part of the BrainLinks-BrainTools research center at the University of Freiburg, which is funded by the Ministry of Economics, Science and the Arts of Baden-Württemberg as part of the sustainability program for projects of the Excellence Initiative II.
• Ilka Diester is Professor of Optophysiology in the Faculty of Biology at the University of Freiburg. Her research interests include the neural basis of motor control and interactions between prefrontal and motor cortex. Thomas Brox is Professor of Pattern Recognition and Image Processing at the Department of Computer Science at the University of Freiburg. His research interests include deep learning for visual data, video analysis, and learned 3D representations. Both are members of the IMBIT//BrainLinks-BrainTools center at the University of Freiburg.