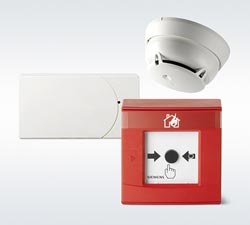 Patented ASA (Advanced Signal Analysis) technology enables Swing to detect fires under all types of conditions, while also preventing false alarms, which can be costly and dangerous.

Fire alarm systems should not be fooled by steam or cigarette smoke, and must also be able to effectively protect people or expensive equipment. Another challenge involves installing such systems in buildings where wiring is either not an option or else not desired. In this case, radio operated systems are used – but up until now these haven't been able to offer the same level of reliability and safety as cable-based solutions.

The failsafe Siemens system employs mesh technology, which has already established itself as a proven standard for secure wireless transmission in the IT sector. In this setup, each device maintains constant contact with neighboring units to ensure there are always at least two redundant paths for data communication. Moreover, because each device operates on two frequency bands and using several channels, the network is able to “heal” itself in the event of a disruption by automatically switching frequencies or channels, or by sending crucial data to a fire alarm center via non-affected units.

Swing is so reliable that it isn't fooled by steam in large kitchens or welding operations in factories, yet it reacts with high sensitivity in hospitals, museums, and clean rooms. ASA technology is what makes the system so foolproof: Each ASA multi-sensor alarm is equipped with two temperature sensors and two optical infrared sensors, which means the alarm units can detect both heat and smoke. Depending on the ambient conditions, the alarms are loaded with special ASA parameters to make their reactions more sensitive or more robust. The system can also call upon a digital library containing thousands of test case studies of all different types of fires, interpret signals in realtime, and then dynamically adjust parameter sets as needed.

Swing wireless networks can be installed quickly and easily, and the alarm units can even be moved around without interrupting operations in the facilities they monitor. This makes the system ideal for historical buildings and museums, industrial plants with variable operations, and trade fair and exhibition centers.