Home / Information Technology / Seeing the forest through the trees with a new LiDAR system
28.06.2017

Seeing the forest through the trees with a new LiDAR system 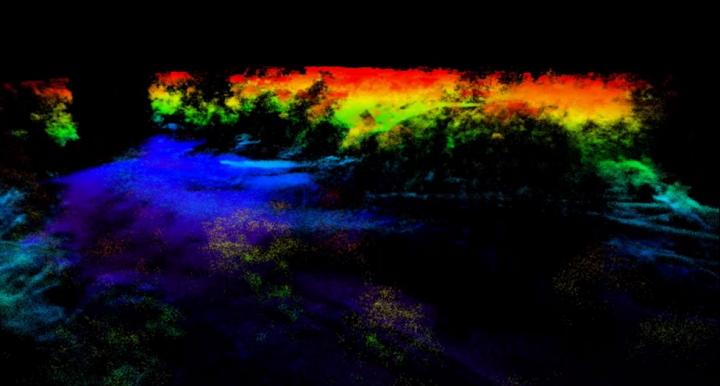 This is a specially designed laser system and a new methodology based on gated digital holography enable LiDAR to see through obscuring elements like foliage and netting. Credit: US Naval Research Laboratory

Shortly after lasers were first developed in the 1960s, LiDAR — whose name originated as a combination of “light” and “radar” — capitalized on the newly unique precision they offered for measuring both time and distance. LiDAR quickly became the standard method for (3-D) land surveys and is now used in a multitude of sensing applications, such as self-driving cars.

By scanning areas of land with lasers, often from airplanes, LiDAR's travel-time measurements for light reflected back from the scanned area provide the distances that make up a resulting high-resolution topography.

As laser and electronic technology evolved, LiDAR's abilities adapted to overcome several limitations and obscuring effects unavoidably produced by real environments, like dynamic weather patterns. With a specially designed laser system and a new methodology based on gated digital holography, research from the Naval Research Laboratory, in Washington, D.C., now provides a method to give LiDAR an enhanced ability to see through otherwise obscuring elements of terrain like foliage or netting. Paul Lebow, from the Naval Research Laboratory, will present this work at The Optical Society's Imaging and Applied Optics Congress, held 26 -29 June, 2017 in San Francisco, California.

“This was an attempt to address one of the problems with something called foliage-penetrating LiDAR,” Lebow said. “You can actually use it to detect three-dimensional images behind an obscuration such as a tree canopy, for instance, in a disaster relief situation where you wanted to find people in trouble. You can illuminate using LiDAR through the leaves and get enough light coming back through to be able to recreate a three-dimensional, topographic view of what's going on beneath.”

Until now, LiDAR measurements of surfaces hidden behind foliage have been difficult to acquire. A majority of the original light in these cases gets thrown away, as far as the camera detecting light from the ground is concerned, since the light hitting the leaves never reaches the ground in the first place. Moreover, the light blocked, and therefore reflected, before getting to the ground often overpowers the signal hitting the camera and hides the fainter signal that does make it to the ground and back.

“We have been working with a process called optical phase conjugation for quite some time and it dawned on us that we might be able to use that process to essentially project a laser beam through the openings of the leaves and be able to see through a partial obscuration,” Lebow said. “It was something that until maybe the last five years was not viable just because the technology wasn't really there. The stuff we had done about 20 years ago involved using a nonlinear optical material and was a difficult process. Now everything can be done using digital holography and computer generated holograms, which is what we do.”

This new system uses a specially designed laser that alone took a year and a half to develop, but was a necessary component according to Lebow and his colleague, Abbie Watnik, who is also at the Naval Research Laboratory and another of the work's authors.

“The real key to making our system work is the interference between two laser beams on the sensor. We send one laser beam out to the target and then it returns, and at the exact same time that return [beam] hits the detector, we interfere it locally with another laser beam,” Watnik said. “We need complete coherence between those beams such that they interfere with one another, so we had to have a specially designed laser system to ensure that we would get that coherence when they interfere on the camera.”

Using a pulsed laser with pulse widths of several nanoseconds, and gated measurements with similar time resolution, the holographic system selectively blocks the earliest-to-arrive light reflecting off obscurations. The camera then only measures light coming back from the partially hidden surface below.

“We've done this earlier using a CW (continuous-wave) laser as a demo, but now we're using a pulsed laser and a very fast gated sensor that can turn on at the appropriate time to basically only let us respond to the light coming from where we want it to come from, from the target,” Lebow said. “The laser is designed so that the time difference between the local reference pulse and the signal pulse that comes back from the target is completely adjustable to accommodate distances from a few feet to several kilometers.”

“Which means,” Watnik said, “we can use this laser system both in our lab on our tabletop setup, as well as outside in the field, using the same laser operating in that range.”

This preliminary, laboratory-based system has provided substantial evidence of its power and potential real-world value. Using a perforated index card to pose as (lab-safe) foliage, not only was the group able to image what the holed index card would have otherwise hidden, but their modeling was also able to recreate the topology of the would-be “foliage.”

“We were able to verify what our computer model says using our real data – matching it to what we actually see using the spatial light modulator, so I think that was an interesting verification of our results,” Watnik said.

Watnik and Lebow, along with their research team, hope to continue with the project and make the adaptations to their prototype necessary to making the foliage-penetrating LiDAR system field-ready.

“That would be our next plan, if we got funding for it,” Lebow said. “There have been several other follow-on projects, not specifically for LiDAR, such as beam steering and other digital holographic work that we're doing for imaging through fog and turbid water based on very similar properties and principles.”