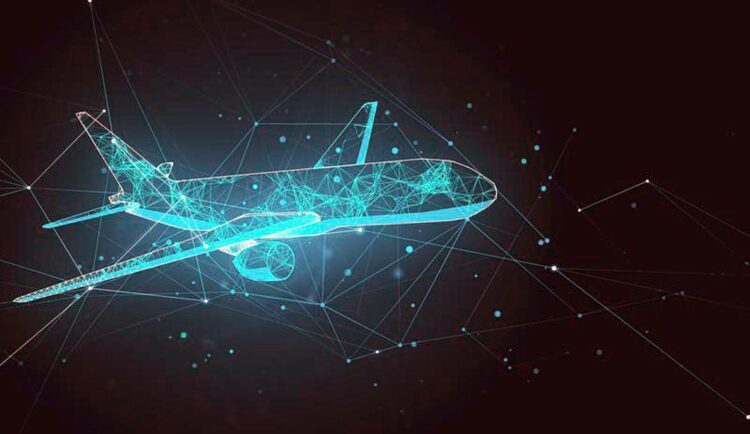 Civil aviation is committed to making progress on the road towards a climate-neutral future. To make current and future aircrafts more energy-efficient and use less jet fuel, the industry needs reliable data about the durability of materials and aerodynamics in actual flight.

Researchers at Fraunhofer IZM are working on behalf of Airbus Central C&T to show how sensors could be integrated in the outer shell of aircraft fuselage to achieve robust and reliable measurements even in the tough conditions in the air.

Today’s globalized world could not function without aviation, but the industry’s impact on the world’s climate must not be ignored. Reconciling the need to travel and transport goods with the vision of a sustainable future means reducing aircrafts’ thirst for fuel and increasing their energy efficiency. Innovative technologies are key here: Lighter, durable materials and optimized aerodynamics are just two possible examples of “green” potential that is being tapped into.

But realizing their true potential needs reliable measurements that can offer insights about how different materials behave and how stresses affect them down to the nanometer scale. This is where researchers from the Fraunhofer Institute for Reliability and Microintegration IZM in Berlin are stepping into the breach with a novel sensor skin that can be stretched over the wings of an aircraft to capture and process data in real time.

In their research, they are zeroing in on the material that is used to coat the fuselage of most aircrafts: Thermoplastic polyurethane or TPU. The team worked on integrating electronic components like sensor systems into strips of TPU to test under different types of conditions. In their eventual application in the real world, these sensor skins could measure temperature, air pressure, or vibration in the wings.

One important factor to know beforehand was how resilient the strips were when exposed to different chemicals like deicing agent or jet fuel. A full sensor skin could give aircraft manufacturers an important pool of detailed data that can tell them more about how the material degrades over time. By tracking environmental parameters and flow resistance in real time during flight, they can also optimize the fuel consumption of their aircraft.

Even though the Fraunhofer team could draw on the Institute’s established expertise in the assembly and interconnection of stretchable electronics, it was no easy task to ready the miniature sensors integrated in the TPU for aeronautic applications. The TPU initially comes as a soft, floppy film, which makes for complicated handling and poses a risk of damage to the sensitive components or the skin itself. Not least for reasons of weight, the entire skin had to stay extremely thin at around 200 µm, but remain a functional, working system. As a first step, the material was characterized, i.e. relevant parameters like its elasticity or expansion when exposed to heat had to be known. This data was then used for more simulations to identify specific weak spots and predict the durability of the material when subject to mechanical or thermomechanical stresses. With all of these insights, the ideal processing parameters, like heat or pressure, for laminating the skins and soldering the components could be established.

The electronic circuits on the stretchable sensor modules were created by means of lithography and etching, as commonly used in the production of circuit boards. After the components had been mounted and soldered in place, the team around Dr Stefan Wagner and Joao Alves Marques used two special processes to protect the system from outside forces: So-called glob tops, also made from polyurethane, are applied and hardened to seal the microelectronic components. The flip-chip assembly method was also used to embed the extremely thin chips right into the substrate material. One definite advantage of the chosen technologies and materials is the flexibility of TPU as a substrate with integrated sensor modules, which is essential for use in aviation. The pliable substrate folds smoothly over the wings and protects the electronics at the same time.

After the trial strips were successfully tested for their response to different mechanical and chemical influences by the industry partner Airbus Central C&T, the doors seem open for follow-up projects. One plan is to use the assembly and interconnection technology to integrate the sensors not only in single strips, but in planar modules with a surface area of up to 60 cm x 60 cm. Including the entire data processing electronics in such TPU mats as well would be an attractive option to keep the entire in-flight electronics autonomous. This would allow data to be collected independently from the aircrafts’ own resources and shared wirelessly by radio or Bluetooth.