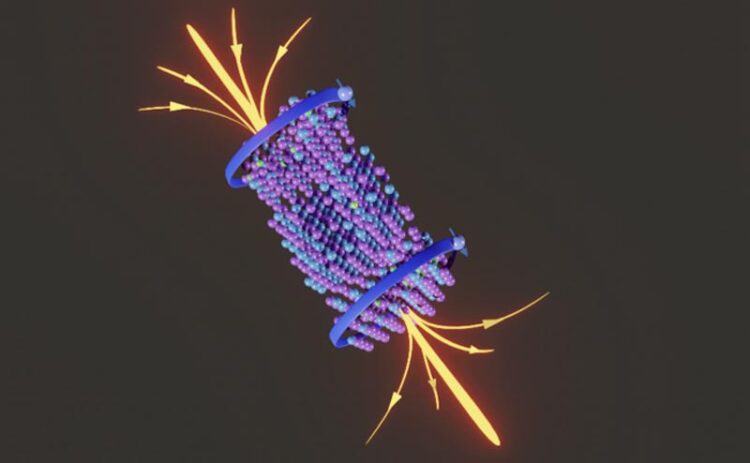 Scientists showed how MnBi6Te10, shown here in purple (tellurium), blue (bismuth) and green (manganese), can act as a magnetic topological insulator, conducting electrical current (blue) along a “quantum highway” without losing energy. The study revealed that a concerted action of different material defects is key to the quantum electronic properties. (Courtesy of Yang Lab)
Credit:University of Chicago Yang Lab

Researchers at the University of Chicago’s Pritzker School of Molecular Engineering (PME) have discovered a new material, MnBi6Te10, which can be used to create quantum highways along which electrons can move. These electron thoroughfares are potentially useful in connecting the internal components of powerful, energy-efficient quantum computers.

When electrons move through traditional metal wires, they lose a small amount of energy—as heat—and some of their intrinsic properties change. Therefore, these wires cannot be used to connect parts of quantum computers that encode data in the quantum properties of electrons.

In the new work, published in the journal Nano Letters, researchers detailed how MnBi6Te10 acts as a “magnetic topological insulator,” shuttling electrons around its perimeter while maintaining the electrons’ energy and quantum properties.

“We’ve discovered a material that has the potential to open the quantum highway for electrons to flow with no dissipation,” said Asst. Prof. Shuolong Yang, who led the research. “This is an important milestone toward the engineering of topological quantum computers.”

Quantum computers store data in qubits, a basic unit of information that exhibits quantum properties including superposition. At the same time researchers work to develop devices that connect such qubits—sometimes in the form of single electrons—they also need new materials that can transmit the information stored in these qubits.

Theoretical physicists have proposed that electrons could be transmitted between topological qubits by forcing the electrons to flow in a one-dimensional conduction channel on the edge of a material. Previous attempts to do this required extremely low temperatures not feasible for most applications.

“The reason we decided to look into this particular material is that we thought it would work at a much more realistic temperature,” said Yang.

Yang’s group began studying MnBi6Te10, using manganese to introduce magnetization to the semiconductor formed by bismuth and tellurium. While electrons flow randomly throughout the interior of most semiconductors, the magnetic field in MnBi6Te10 forces all electrons into a single-file line on the outside of the material.

The PME researchers obtained MnBi6Te10 that had been fabricated by collaborators at the 2D Crystal Consortium in Pennsylvania State University, led by Zhiqiang Mao. Then the team used a combination of two approaches—angle-resolved photoemission spectroscopy and transmission electron microscopy (TEM)—to study exactly how the electrons within MnBi6Te10 behaved and how the movement of the electrons varied with magnetic states. The TEM experiments were performed in collaboration with the Pennsylvania State University lab of Nasim Alem.

When they were probing the properties of MnBi6Te10, one thing stumped the research team at first: some pieces of the material seemed to work well as magnetic topological insulators, while other pieces didn’t.

“Some of them had the desired electronic properties and others didn’t, and the interesting thing was that it was very hard to tell the difference in their structures,” said Yang. “We saw the same thing when we did structural measurements such as x-ray diffraction, so it was a bit of a mystery.”

Through their TEM experiments, however, they revealed that all the pieces of MnBi6Te10 that worked had something in common: defects in the form of missing manganese scattered throughout the material. Further experiments showed that, indeed, these defects were required to drive the magnetic state and enable electrons to flow.

“A very high value of this work is, for the first time, we’ve figured out how to tune these defects to enable quantum properties,” said Yang.

The researchers are now pursuing new methods of growing MnBi6Te10 crystals in the lab, as well as probing what happens with ultra-thin, two-dimensional versions of the material.

In addition to Yang, authors of the work include undergraduate PME students Emmanuel Green and Sebastian Fernandez-Mulligan and PME postdoctoral scholar Chenhui Yan. Undergraduate Jess Ip and PME graduate student Duy Nguyen developed a graphic to accompany the research which was chosen as a Nano Letters cover.

Funding: US Department of Energy, National Science Foundation, Willner Family Leadership Institute for the Weizmann Institute of Science, the Benoziyo Endowment Fund for the Advancement of Science, Ruth and Herman Albert Scholars Program for New Scientists, the European Research Council, the Air Force Office of Scientific Research and GAME MURI.