Home / Information Technology / Breaking the size and speed limit of modulators: The workhorses of the internet
14.04.2020

Breaking the size and speed limit of modulators: The workhorses of the internet 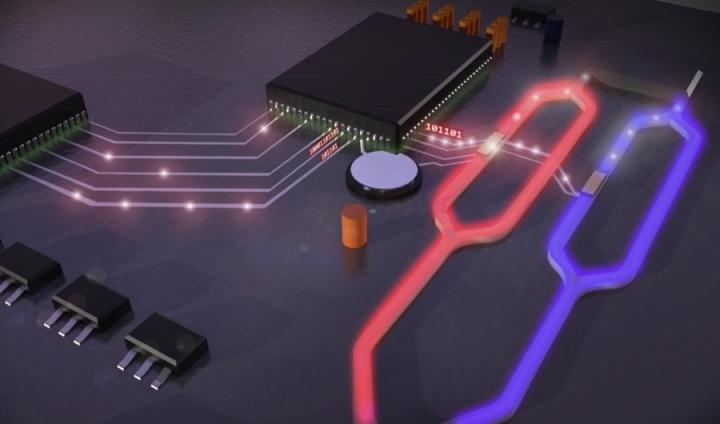 Researchers developed and demonstrated for the first time a silicon-based electro-optical modulator that is smaller, as fast as and more efficient than state-of-the-art technologies.

By adding indium tin oxide (ITO) – a transparent conductive oxide found in touchscreen displays and solar cells – to a silicon photonic chip platform, the researchers were able to create a compact device 1 micrometer in size and able to yield gigahertz-fast, or 1 billion times per second, signal modulation.

Electro-optical modulators are the workhorses of the internet. They convert electrical data from computers and smartphones to optical data streams for fiber optic networks, enabling modern data communications like video streaming.

The new invention is timely since demand for data services is growing rapidly and moving towards next generation communication networks. Taking advantage of their compact footprint, electro-optic converters can be utilized as transducers in optical computing hardware such as optical artificial neural networks that mimic the human brain and a plethora of other applications for modern-day life.

Electro-optical modulators in use today are typically between 1 millimeter and 1 centimeter in size. Reducing their size allows increased packaging density, which is vital on a chip.

While silicon often serves as the passive structure on which photonic integrated circuits are built, the light matter interaction of silicon materials induces a rather weak optical index change, requiring a larger device footprint.

While resonators could be used to boost this weak electro-optical effect, they narrow devices' optical operating range and incur high energy consumption from required heating elements.

By heterogeneously adding a thin material layer of indium tin oxide to the silicon photonic waveguide chip, researchers at the George Washington University, led by Volker Sorger, an associate professor of electrical and computer engineering, have demonstrated an optical index change 1,000 times larger than silicon.

Unlike many designs based on resonators, this spectrally-broadband device is stable against temperature changes and allows a single fiber-optic cable to carry multiple wavelengths of light, increasing the amount of data that can move through a system.

“We are delighted to have achieved this decade-long goal of demonstrating a GHz-fast ITO modulator. This sets a new horizon for next-generation photonic reconfigurable devices with enhanced performance yet reduced size,” said Dr. Sorger

To schedule an interview with Dr. Sorger about the new device, please contact Timothy Pierce at tpie@gwu.edu or 202-994-5647.

This technology is covered by several patent applications and is available for licensing (US Patent App. 16/545,733).