A boost in performances in fibre-integrated quantum memories 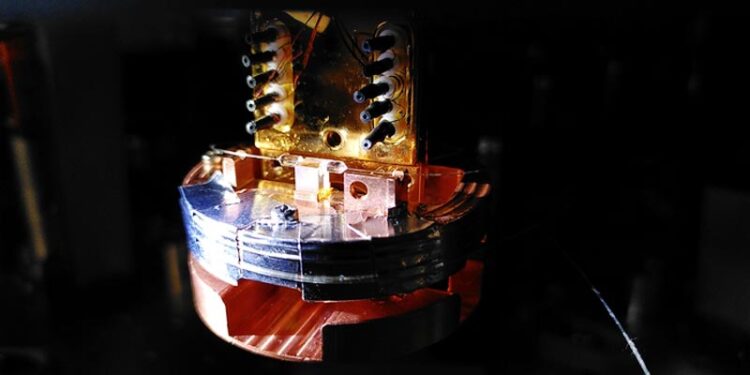 Picture of the quantum memory crystal with two optical fibers attached to its sides, coupling light in and out of the waveguide.
Credit: © ICFO/ Samuele Grandi

Quantum memories are one of the building blocks of the future quantum internet. Without them, it would be rather impossible to transmit quantum information over long distances and expand into a real quantum network. These memories have the mission of receiving the quantum information encoded in a photon in the form of qubits, store it and then retrieve it. Quantum memories can be realized in different material systems, for example ensembles of cold atoms or doped crystals.

In order to be useful memories, they need to fulfil several requirements, such as the efficiency, duration, and multiplexing of their storage capability, to ensure the quality of the quantum communication that they will support. One other requirement that has become a matter of considerable research is designing quantum memories that can be directly integrated in the fibre-optic network.

In recent years and with the boom of quantum technologies, there has been a lot of work oriented to improve the scalability of existing quantum memories (make them smaller and/or simpler devices) to facilitate their integration and deployment in a real-work network. Such a fully integrated approach comes with several physical and engineering hurdles, including finding a solution that preserves good coherence properties, providing an efficient and stable system to transfer photons from optical fibres to the quantum memory, as well as the miniaturisation of the control system of the quantum memory and its interface with incoming light. All of this should be performed while reaching the same level of performances obtained in “standard” bulk versions of the device. This has so far proved challenging, and current realizations of fibre-integrated quantum memories are far from what can be reached in bulk memories.

With these objectives clear, in a recent work published in Science Advances, ICFO researchers Jelena Rakonjac, Dario Lago-Rivera, Alessandro Seri and Samuele Grandi, led by ICREA Prof. at ICFO Hugues de Riedmatten, in collaboration with Giacomo Corrielli and Roberto Osellame from IFN-CNR and Margherita Mazzera from Heriot-Watt University, have been able to demonstrate entanglement between a fibre-integrated quantum memory and a telecommunications-wavelength photon.

In their experiment, the team used a crystal doped with praseodymium as their quantum memory. A waveguide was then laser-written inside the memory. This is a micrometer-scale canal within the crystal which confines and guides the photon in a tight space. Two identical optical fibres were then attached to both sides of the crystal to provide a direct interface between photons carrying quantum information and the memory. This experimental setup enabled an all fiber connection between the quantum memory and a source of photons.

To prove that this integrated quantum memory can store entanglement, the team used a source of entangled photon pairs where one photon is compatible with the memory, while the other one is at telecom wavelength. With this novel setup, they were able to store photons from 2 µs up to 28 µs and preserve the entanglement of the photon pairs after storage. The result obtained is of major improvement since the entanglement storage time shown by the team is 1000 longer (three orders of magnitude) than any other previous fibre-integrated device used until now, and approaching the performances observed in bulk quantum memories. This was possible thanks to the fully integrated nature of the device, which allowed for the use a more sophisticated control system than previous realisations. Finally, since the entanglement was shared between a visible photon stored in the quantum memory, and one at telecom wavelengths, the team also proved that the system is entirely compatible with telecommunications infrastructure and suitable for long-distance quantum communication.

The demonstration of this type of integrated quantum memory opens up many new possibilities, particularly regarding multiplexing, scalability and further integration. As Jelena Rakonjac emphasizes, “this experiment has given us great hopes in the sense that we envision that many waveguides can be fabricated in one crystal, which would allow for many photons to be stored simultaneously in a small region and maximize the capability features of the quantum memory. Since the device is already fibre coupled, it can also be more readily interfaced with other fibre-based components”.

Hugues de Riedmatten concludes by stating that “we are thrilled with this result which opens many possibilities for fibre integrated memories. What is clear is that this particular material and way of creating waveguides allows us to achieve performances close to bulk memories. In the future, extending the storage to spin states will allow on-demand retrieval of the stored photons and lead to the long storage times that we have been aiming for. This fibre-integrated quantum memory definitely shows great promise for future use in quantum networks”.