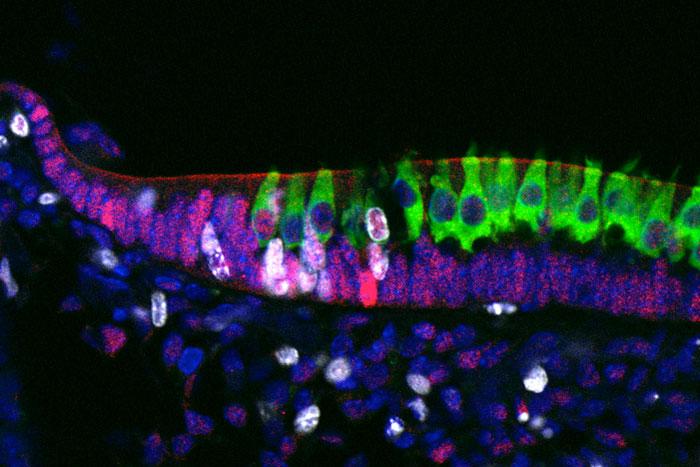 One of the two proteins, Sox4 (magenta), appears at the outer edge of the developing utricle, and occasionally within the nuclei of new hair cells (green). Proliferating support cells, which in some cases become hair cells, appear in white. Credit: Laboratory of Sensory Neuroscience at The Rockefeller University/PNAS

Loud noise, trauma, infections, plain old aging–many things can destroy hair cells, the delicate sensors of balance and sound within the inner ear. And once these sensors are gone, that's it; the delicate hair cells don't grow back in humans, leading to hearing loss and problems with balance.

But scientists hope to find a way to regenerate these cells by examining how they develop in the first place. New research at Rockefeller University, in A. James Hudspeth's Laboratory of Sensory Neuroscience, has identified two genes pivotal to the production of hair cells in young mice, who, just like human babies, lose the ability to generate these sensors shortly after birth. The study was published the week of October 26 in the Proceedings of the National Academy of Sciences.

First author, Ksenia Gnedeva, a postdoc in the lab, began by examining changes in gene expression in the utricle, a hair cell-lined organ within the inner ear that detects motion.

She saw that the activity of two genes dropped dramatically shortly after the mice were born and hair cells ceased to develop in their utricles. These genes code for the proteins Sox4 and Sox11, which play a role in shaping the identity cells assume by regulating the expression of other genes.

Gnedeva tested these proteins' involvement in hair cell formation by altering their expression. When both genes were shut down, she found that the entire inner ear, not just the utricle, developed abnormally.

In other experiments, she turned on the genes in older mice whose hair cells were fully matured, and discovered that this gene activation could induce the production of new hair cells within a fully developed utricle.

She is now exploring the series of molecular interactions that normally lead to the activation of these proteins and the steps that follow. “Our ultimate goal is to find a target that would allow us to restore hair cells later on in life. It appears possible that these proteins, or perhaps other steps in the same pathway, might be potential targets,” she says.

Hudspeth, the study's senior author, is the F.M. Kirby Professor at Rockefeller and an investigator with the Howard Hughes Medical Institute.