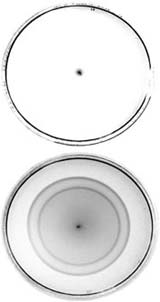 A protein enables harmful Salmonella bacteria to switch from clinging to our gut lining to swimming off. This get-up-and-go is so crucial to Salmonella’s survival that the protein could prove to be a good target for drugs.

The Salmonella variant Typhimurium causes around 1.4 million cases of food poisoning in the United States each year, and about 1,000 deaths – mainly among infants and the elderly. The bug grips the gut wall to cause infection, and swims off to avoid immune-system attacks or to infect another host.

This protein makes the bacterium grow sticky filaments, called fimbriae, which lash it to the gut lining. When FimZ production is switched off, the bacteria instead make smooth hairs called flagella. Spinning like propellers, these move the bugs around.

Mutant bacteria that produce too much FimZ cannot budge, even in conditions that normally send them packing, Clegg and Hughes report. Conversely, forcing the bugs to make too little of the protein could stop them sticking to surfaces, the researchers hope.

“It’s a very promising angle of attack,” says Ian Blomfield, who studies gut bacteria at the University of Kent in Canterbury, UK. He has identified a similar molecular switch in highly infectious Escherichia coli bacteria, which he is patenting as a potential drug target.

Clegg and Hughes suspect that FimZ is half of a two-component system. Many bacteria use such protein pairs to sense their surroundings.

Disrupting FimZ production inside Salmonella may be enough to stop the microbes in their tracks. But blocking the other protein, which sits on the outside of the bacteria, might work even better. This would blind a bug to the subtle chemical cues that tell it whether to stay or go.

“If you can knock out that molecule, the bacteria won’t be able to interact with their environment,” says Clegg. He hopes that more cellular sleuthing will identify the external molecule, which is a tempting target for future drugs or vaccines.