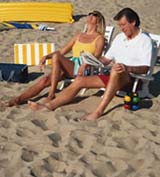 An immune system chemical may undo skin damage by sunlight.

A chemical involved in immune-system signalling may be able to reverse some types of skin damage caused by sunlight. It could reduce sunburn by activating DNA-repair mechanisms, a new study suggests, raising the possibility that the chemical might be used to prevent or treat skin cancer1.

High-energy ultraviolet light is thought to promote skin cancer by damaging the DNA within cells. Skin cancer, the most common malignancy among people of Western European descent, strikes over one million people each year in the United States alone.

But when cultured human skin cells were treated with the protein interleukin-12 (IL-12), they were less likely to incur permanent DNA damage or die after being exposed to ultraviolet light, the researchers found. The cells showed as much damage as control cells immediately after exposure, but had significantly less damage several hours later. The same effect was found in the skin of mice treated with IL-12 before being exposed to ultraviolet. This suggests that IL-12 promotes repair rather than blocking ultraviolet rays, as most sunscreens do.

The protein appears to stimulate a cellular editing system that snips damaged pieces of DNA out of the sequence, explains Thomas Schwarz of the University of MÃ¼nster in Germany, a member of the team that carried out the study.

IL-12 could be a “very attractive” treatment for sun damage, says Schwarz, but it will never take the place of sunscreens, he cautions.

While they are still the best defence against skin cancers, sunscreens are never 100% effective says Julia Newton Bishop, who studies melanoma at St James’s Hospital in Leeds, UK. “So we’re always interested in mechanisms to reduce damage or speed repair.”

IL-12 may protect skin by sparking an “SOS response”, suggests Barbara Gilchrest, who studies DNA repair at Boston University School of Medicine. Bacteria have long been known to throw their DNA repair system into a higher gear after being exposed to sunlight, so that later exposures are less damaging; in recent years, mammalian skin cells have been found to do the same.

IL-12 is produced after exposure to sunlight, Gilchrest says. Adding it to cells before exposing them to ultraviolet light could “trick the system into thinking it has already seen sun damage so it should get ready,” she says.

IL-12 is not the first chemical found to promote DNA repair after ultraviolet damage. Earlier this year, researchers showed that a bacterial enzyme placed on the skin prevents the formation of new cancerous regions in people highly prone to skin cancer.

But unlike the bacterial enzyme, IL-12, being naturally produced by human cells, would be less likely to trigger allergic responses says Kenneth Kraemer, who works on DNA excision at the National Institutes of Health in Bethesda, Maryland. More work is needed to clarify IL-12’s effects and possible side effects, he adds, but the idea that it could be used as a therapy for skin cancer is “provocative”.

IL-12’s protective function is a surprise. It belongs to a class of signalling chemicals called cytokines, which were never suspected of being able to stimulate DNA repair.

The work “opens up a whole new area of investigation,” says Kraemer. If IL-12 is involved in DNA repair, he says, other cytokines may be as well. “This is probably the tip of the iceberg.”