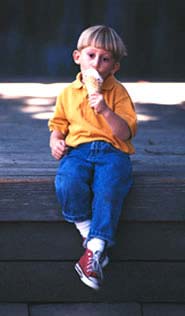 A large, long-term study confirms that diet can help some epileptic children.

A strict high-fat, low-carbohydrate, calorie-restricted diet reduces seizures in children with intractable epilepsy. So concludes the largest and longest trial of an eating plan that was first suggested almost a century ago.

For about two years, epileptic youngsters on a ’ketogenic diet’ eat 25% less than normal and consume 90% of their daily calories as fats. They take vitamins and minerals to avoid malnutrition and their condition is monitored by a doctor and a dietician. There is currently a resurgence of interest in the diet, which was eclipsed by the development of anticonvulsant drugs.

It is “an excellent alternative” to drugs for children whose seizures cannot be controlled easily, says the study’s leader, John Freeman of the Johns Hopkins Medical Institutions in Baltimore, Maryland. “What we’re seeing is a long-lasting effect,” he adds.

The study1 confirms that the diet should not be considered merely as a last-ditch treatment for children resistant to conventional anti-epileptic therapies, but should be introduced sooner, says Patricia Szot of the Veterans Administration Medical Center in Seattle, who is investigating the diet’s effects.

Others are more cautious. “Surgery might be more effective where epilepsy is caused by a brain lesion,” points out Gary Mathern, director of the Pediatric Epilepsy Surgery Program at the University of California in Los Angeles. “It would have been useful,” he notes, “if the results had been compared against a group that did not use the diet.”

Carl Stafstrom, director of the Pediatric Epilepsy Research Laboratory at the University of Wisconsin in Madison, is more enthusiastic: “It is time to stop chewing the fat about whether the diet works or not,” he says. Researchers should, he suggests, “move on to optimizing it and characterizing the subgroups of children who are most amenable”.

Around 50 million people worldwide have epilepsy – sudden and recurrent disruptions to their mental function, consciousness, senses or movements caused by sporadic malfunctions of certain nerve cells. Up to 30% of those are resistant to more than three medications and are said to have ’intractable epilepsy’2.

Freeman’s team tracked 150 epileptic 5-year-olds who followed the diet for between 1 and 6 years. Before the trial, the children averaged 410 seizures per month and had each tried about six medications. Up to six years after the start of the diet, nearly half of the children had 50% fewer seizures. Twenty children had no seizures and 29 were medication-free.

Some 90% of parents involved in the study said they would “recommend the diet to someone else”, although 41% were concerned that their children did not grow well on it.

Ketogenic meals produce a high blood concentration of partly burned fat molecules called ketone bodies. But it is not clear why this reduces convulsions. There is now a “flurry of activity”, says Freeman, to identify the biochemistry underlying the treatment’s success and to develop new drugs that mimic its anticonvulsant effects.