Making smart drugs that deliver the right kind of punch 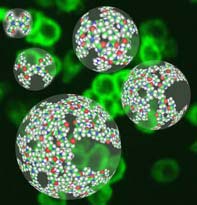 It’s a bitter irony of cancer therapy: treatments powerful enough to kill tumor cells also harm healthy ones, causing side effects that diminish the quality of the lives that are saved.

Researchers at the University of Michigan’s Center for Biologic Nanotechnology hope to prevent that problem by developing “smart” drug delivery devices that will knock out cancer cells with lethal doses, leaving normal cells unharmed, and even reporting back on their success. A graduate student involved in the multidisciplinary project will discuss her recent work—zeroing in on characteristics that make the devices most effective—at a meeting of the American Physical Society in Montreal, Quebec, March 23.

The U-M group is using lab-made molecules called dendrimers, also known as nanoparticles, as the backbones of their delivery system. Dendrimers are tiny spheres whose width is ten thousand times smaller than the thickness of a human hair, explains physics doctoral student Almut Mecke. “These spheres have all sorts of loose ends where you can attach things—for example, a targeting agent that can recognize a cancer cell and distinguish it from a healthy cell. You can also attach the drug that actually kills the cancer cells. If you have both of these functions on the same molecule, then you have a smart drug that knows which cells to attack.”

Mecke’s part of the project focuses on finding out how to get dendrimers into cancer cells without disrupting healthy cells. Previous work had shown that high concentrations of dendrimers are toxic—even without their cancer drug cargo—but no one was sure why that was or what could be done about it. Mecke used an atomic force microscope—a device so sensitive it can take pictures of single molecules—to spy on interactions between dendrimers and membranes similar to those that surround living cells.

The atomic force microscope is something like a phonograph with a motion detector attached to its needle. “As the tip moves across the surface, you can detect its movement each time it hits a bump,” Mecke said. “If you scan the surface, line by line, and you record the motion of the tip, you get a three-dimensional image of the surface,” where each bump is an individual molecule. By taking a series of pictures and putting them together into a movie, Mecke could watch dendrimers in action. What she saw was that “certain kinds of dendrimers disrupt membranes by literally punching holes in them.”

That wasn’t the kind of punch the researchers wanted to deliver, so they tried tinkering with the dendrimers to see if they could prevent the damage. “Dendrimers usually have a charge, and so do cell membranes,” Mecke said. “It’s the interaction between those charges that causes dendrimers to bind to cell membranes and disrupt them. What our group found is that if you modify the surface of the dendrimers chemically, they become uncharged” and no longer beat up on membranes.

Early results of studies with mice show that the nanoparticle drugs do treat cancer effectively with fewer side effects than conventional chemotherapy drugs, just as the researchers had hoped. “It’s nice to see how everything fits together—my work with the model membrane, my colleague’s work with cell culture and other people’s work with the animal studies,” Mecke said. Next, the researchers hope to add more functions to their dendrimer-drug devices, such as biosensors that can report on cancer cell death, indicating how successful a particular treatment has been.