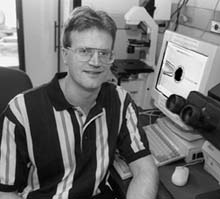 A University of Iowa study suggests that inhibiting a certain protein involved in inflammation might be of therapeutic benefit in organ transplantation, heart attacks and possibly stroke. The study, led by John Engelhardt, Ph.D., UI professor and interim head of anatomy and cell biology, found that blocking the action of this protein can prevent the tissue damage caused by ischemia/reperfusion injury. The study is published in the March 1 issue of the Journal of Clinical Investigation.

Ischemia/reperfusion injury is a common, damaging component of organ transplantation, heart attack, and stroke and is a determinant of organ failure in all cases. In this type of injury, the organ is initially deprived of oxygen-carrying blood (ischemia). During reperfusion (the re-establishment of blood supply), toxins are briefly generated from the oxygen that lead to tissue damage and trigger a potentially detrimental inflammatory response.

Although inflammation is an important bodily response to environmental injuries including bacterial and viral infection as well as ischemia/reperfusion injury, too much inflammation can damage healthy tissue and cause problems.

“In this study we looked at a well-known ’master switch’ type of protein called NF-kB that controls the expression of genes that regulate inflammatory responses,” said Engelhardt, who also is professor of internal medicine in the UI Roy J. and Lucille A. Carver College of Medicine and director of the UI Center for Gene Therapy of Cystic Fibrosis and Other Genetic Diseases.

Engelhardt and his colleagues, including graduate student and lead author of the study, Chenguang Fan, compared the activation of NF-kB in response to bacterial infection and ischemia/ reperfusion injury. Historically, these two types of injury were thought to produce inflammation via the same cellular pathway. However, the UI researchers found that there are two distinct pathways for the two different types of injury.

“Important health implications have emerged from these studies, which may aid us in treating environmental injuries that have both ischemic and inflammatory components. We can now selectively remove, like a molecular surgeon, activation of one or both of these pathways using gene therapy approaches,” Engelhardt said. “We found that selective inhibition of the pathway triggered by ischemia/reperfusion injury was better for the organ and better for the animal.”

The UI team used gene manipulation to replace IkB alpha with IkB beta in mice. Mice with only IkB beta protein respond to bacterial infection in the same way that normal mice do. However, these mice sustain less liver damage and were more likely to survive ischemic/reperfusion injury to that organ than mice with both inhibitory proteins.

The study found that the two inhibitory proteins function similarly in response to bacterial infection, but have different abilities to activate NF-kB after ischemia/reperfusion injury. Furthermore, the results suggest that inhibiting the IkB alpha pathway could prevent ischemic/reperfusion injury to transplanted organs and therefore improve the success of this procedure.

Similarly, Engelhardt speculated that blocking this pathway in patients at risk of a heart attack – a patient undergoing angioplasty, for example – potentially could benefit those patients in the event of a heart attack.

In addition to the animal experiments, the UI team also used gene therapy to manipulate the activation of NF-kB. These experiments helped reveal the different molecular pathways that activate NF-kB as a result of different types of injury.

“Gene therapy was a tool we used to address the mechanism of the disease process. But once you understand the process, those gene therapy tools become potential therapeutic tools,” Engelhardt added. “This research has led to a better understanding of the disease process that occurs following ischemic/ reperfusion injury and a better understanding will allow us to potentially prevent or treat ischemic organ injury disorders.”

University of Iowa Health Care describes the partnership between the UI Roy J. and Lucille A. Carver College of Medicine and UI Hospitals and Clinics and the patient care, medical education and research programs and services they provide. Visit UI Health Care online at http://www.uihealthcare.com.

PHOTOS/GRAPHICS: A photo of Dr. Engelhardt is available at http://www.anatomy.uiowa.edu/pages/directory/faculty/engelhardt.html