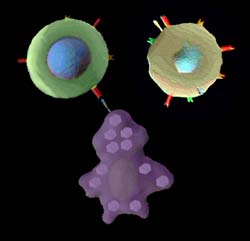 Like most persistent viruses, HIV uses a variety of strategies to counteract its host’s response to infection. HIV infects the very cells that coordinate the immune response, which compromises the immune system and leaves the body susceptible to normally harmless microorganisms. It is these opportunistic infections, rather than the virus itself, that make HIV so deadly. Victor Appay and colleagues now show that an important effect of persistent HIV infection is generally elevated immune activation. Rather than being beneficial to the host, this causes non-specific premature maturation of many of the remaining functional T-cells. The resulting premature aging and exhaustion of the immune system increase the likelihood of opportunistic infection.

HIV targets white blood cells with surface receptors called CD4. These CD4, or helper, T-cells normally orchestrate the body’s immune response. In response to a particular pathogen, they induce cytotoxic T-cells (or CD8 T-cells) and other immune cells to multiply and differentiate–that is, to become specially equipped to recognize and target a particular pathogen, or antigen. When the researchers analyzed T-cells from a group of untreated HIV infected individuals at different stages–acute infection, chronic infection without progression, and chronic infection with signs of progression–they found to their surprise that during acute HIV infection, the vast majority (80%–90%) of the overall CD8 T-cell population was activated–not just the HIV-specific CD8 T-cells. CD8 T-cells specific to two other chronic (and usually benign) pathogens, Epstein–Barr virus and cytomegalovirus, showed significant activation levels during HIV acute infection. And as HIV/AIDS progresses, many of the CD8 T-cells developed to a state of senescence where they are no longer active.

These results show that chronic and nonspecific overactivation of the immune system during HIV infection produces a large pool of highly differentiated T-cells which exhibit characteristics associated with “replicative senescence”–they are in effect old, worn-out cells that can no longer proliferate and fight pathogens effectively.