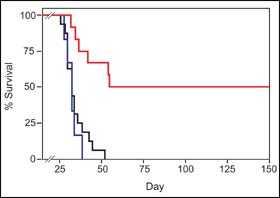 Cancer often begins with mutations in tumor suppressor pathways. Tumor suppressor genes–such as p53–arrest cell growth and induce apoptosis (programmed cell death) in response to cellular stress, such as chromosomal damage. Cells with p53 mutations can escape these constraints, leading to the uncontrolled growth characteristic of “immortal” cancer cells. Nearly all types of tumors have mutations in the p53 pathway, many of them in the p53 gene itself. Treatments focused on restoring p53 function–which is lost selectively in cancer cells–should prove more effective than standard therapies which indiscriminately target all dividing cells. With the goal of developing specific therapeutic strategies, Steven Dowdy and colleagues show that restoring p53 protein function in mouse cancer models eliminates tumors and dramatically increases survival of the animals.

While past efforts to restore tumor suppressor function in cancer cells have focused on gene therapy, Dowdy and colleagues introduced modified p53 peptides (parts of the protein) into cancer cells. p53 works as a “transcriptional” activator that binds to specific gene sequences and triggers apoptosis in response to DNA damage. One region of the p53 protein, the C-terminal domain, facilitates DNA binding. In cancer cells, synthesized peptides (called p53C¢) derived from this region can induce apoptosis by restoring function to p53 proteins with DNA-binding mutations.

To get p53C¢ peptides into cancer cells, the scientists used a technique pioneered by Dowdy that delivers proteins into the cell interior. Since the cell membrane normally limits passage to only small molecules (larger molecules generally enter through surface receptors), this is no small feat. Testing the effectiveness of the peptide therapy on mouse strains that model human metastatic disease, the scientists found that mice treated with the p53C¢ peptide showed a significant reduction in tumor mass and lived six times longer than mice treated with a control peptide or untreated mice, with some animals remaining disease-free more than 200 days after treatment.

These are encouraging results for targeted “intracellular biologic” therapeutics which, because p53 mutation is one of the most common events in the development of cancer, could have implications for a wide variety of tumors.