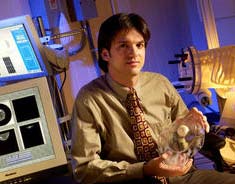 Researchers at Duke University Medical Center have developed a new breast scanner that is designed to detect subtle changes in breast cells before a lump can be felt by hand or seen with X-ray mammography.

Such early detection should enable doctors to more successfully treat breast cancer before it has formed a tumor or spread to lymph nodes, said Martin Tornai, Ph.D., associate professor of radiology and biomedical engineering at Duke and developer of the device. The new camera has undergone extensive testing in artificial breasts and will begin testing in women this spring.

The camera uses nuclear medicine to pick up chemical changes to breast cells that signal the cells are becoming malignant, said Tornai. The camera should be particularly useful for detecting tumors in large or dense breasts, which are difficult to image using traditional mammography because X-rays often cannot penetrate them. Moreover, the geometry of the new device allows for imaging small breasts and the nearby chest wall. It can even image the axillary lymph nodes to look for evidence of metastasis — which traditional mammography cannot do. The new device works without any breast compression, and women may not be required to remove their bras.

The key to the new scanner is that it detects changes in the behavior of cancer cells rather than structural changes, such as tumor masses, which take much longer to develop, said Tornai.

“Once you start seeing structural changes using mammography, that indicates the molecular process has been going on for awhile,” he said. “If we can detect subtle changes in cells before a tumor has developed, we have a better chance of treating the abnormal cells in their earliest stages of malignancy.”

To use the device, a cancer-specific radioactive tracer is injected into the patient’s bloodstream. The tracer, called sestamibi, is preferentially absorbed by cancer cells because they have large numbers of mitochondria, the cells’ powerhouses. Cancer cells have more mitochondria than normal cells because they are more metabolically active and require more energy to grow and spread.

Next, the camera obtains an image by picking up gamma rays — high energy photons or units of light — that are emitted by the radioactive atom attached to sestamibi. The gamma rays easily penetrate the tissue and can be detected non-invasively by a gamma ray camera.

“Nuclear imaging tracers like sestamibi show up in both pre-malignant and malignant breast cells as a little light bulb in the middle of a dim space,” said Tornai. “You really want a tracer to home in on small bits of cancer that may otherwise be too small for other scanners to detect.”

Gamma ray tracers such as sestamibi have a short half-life and are broken down quickly by the liver and excreted. The amount of radiation exposure from a single diagnostic procedure is about the same as a year’s exposure from the natural background radiation found in the environment, said Tornai, hence, they are relatively safe.

Early studies using existing clinical gamma cameras have been encouraging until now, said Tornai, but they have fallen short of being able to detect cancers smaller than a marble (one centimeter). The existing clinical nuclear medicine cameras are large whole-body scanners that take a single, two-dimensional image that cannot generally take multiple views of the breast. Furthermore, their cumbersome size makes it difficult to obtain a close image of the breast, which is critical to obtaining a complete, three-dimensional picture.

To overcome these limitations, Tornai developed a miniature gamma camera and rotating platform system that allows it to completely and closely orbit a breast, creating a high-resolution, three-dimensional image, called an emission or functional mammotomogram.

In early studies, Tornai and Duke colleagues Caryl Archer and James Bowsher, Ph.D., assistant research professor of radiology, optimized the imaging system using an artificial breast, which they implanted with small spheres that simulate cancerous growths. The spheres ranged from 4 millimeters, about the size of an early cancerous lesion, up to one centimeter. The researchers demonstrated that, in principle, it is possible to locate even a pinhead-sized lesion using the new device.

In clinical practice, the procedure would take 10 to 20 minutes per breast, and should be more comfortable for the patient than mammography, because the breast is not compressed during the procedure. Patients may not even need to remove their bra, since the device never touches the breast, noted Tornai.

As a screening device, functional mammotomography will not replace traditional mammography in most cases, said Tornai, but it could become a useful adjunct device in the mammography clinic.

“This technology could potentially be applied to screening women who are at high risk for breast cancer, particularly younger women who have denser breast tissue that X-ray mammography can’t easily penetrate,” he said.

In addition, Tornai said the device could be useful to monitor the course of chemotherapy or radiation therapy in breast cancer patients because it could detect changes to the cancer cells.

“During and after chemotherapy, if you take an X-ray mammogram of the same cancerous tissue, it looks identical to its pre-treatment size,” says Tornai. “But if you take a nuclear medicine image, the dead tissue doesn’t take up the tracer, so you can see if the therapy is having an effect very early on, much sooner than waiting for tumor shrinkage.”

Tornai plans to begin imaging studies with patients at Duke in spring 2004, and will begin studies with physicians to determine how small a lesion can actually be detected with the naked eye from the resulting images.

The next step in the development of the device will be combining the nuclear medicine image with a dedicated X-ray computed tomography (CT) scan, which will provide a structural mammotomogram. This information can be overlayed with the functional information on the same three-dimensional image.

“One of the criticisms of nuclear medicine is that it is hard for physicians to read the grainy images,” Tornai said. “For example, an X-ray will exquisitely show the bones in my hand, and as an analogy, a nuclear medicine image will show the ring on my finger which will appear to be floating in space. We need an imager that will show where the ring sits on my hand, and we can achieve that with a dual imager.”

Tornai is awaiting patent approval on the new device, including the combination device that overlays X-ray and nuclear medicine images.