Home / Health and Medicine / Novel Drugs for the Treatment of Diabetes Developed by Hebrew University Researcher
30.05.2003 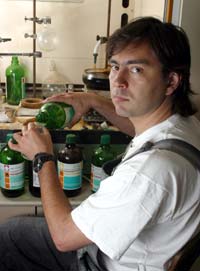 A new approach to providing medication for adult diabetics (type 2 diabetes) that is not dependent on insulin has been developed by a doctoral student at the Hebrew University of Jerusalem. For his work, which he did for his Ph.D. thesis in pharmacology, Arie Gruzman was awarded one of this year’s Kaye Innovation Awards at the Hebrew University.

Unlike other conventional drugs that require active insulin-producing cells in the pancreas and that often fail to overcome a companion problem of insulin resistance, the novel compounds developed by Gruzman and his supervisor, Prof. Shlomo Sasson, in collaboration with Prof. Yehoshua Katzhendler and Prof. Erol Cerasi of the Hebrew University School of Pharmacy and the Faculty of Medicine, are unique in that they can reduce hyperglycemia (above-normal levels of glucose in the blood) by increasing the rate of glucose disposal in the blood in a non-insulin-dependent manner.

The new drugs, when fully developed, may provide a treatment to diabetic patients who have especially serious problems of insufficient natural insulin production and/or resistance to insulin.

A patent for these new compounds – which, perhaps surprisingly, are based on D-Xylose, a sugar found in fruits — has been obtained through the Hebrew University’s Yissum Research Development Company. The laboratory work was supported financially by the Deutsch Foundation of Venezuela and the Nophar Program of the Israel Ministry of Trade and Industry.

Gruzman, 32, was born in Russia and studied at a medical institute in his home town of Nizhny Novogrod. He immigrated to Israel 12 years ago and earned a B.Sc.degree in pharmaceutical chemistry at Bar-Ilan University, after which he began his graduate studies at the Hebrew University. He is married to another immigrant from the former U.S.S.R., who is a graduate student at the Hebrew University Faculty of Medicine, and they are the parents of two daughters.