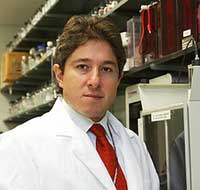 Combining the tumor suppressing Rb2 gene with doses of gamma radiation speeds up the ability of tumor cells to die, according to a study by researchers at Temple University’s College of Science and Technology.

The results of the study, “pRb2/p130 promotes radiation-induced death in glioblastoma cell line HJC12 by p73 upregulation and Bcl-2 downregulation,” appear in the August 29 issue of Oncogene (Vol. 21, Issue 38).

In the study, which was started at Thomas Jefferson University and completed at Temple’s Sbarro Institute for Cancer Research and Molecular Medicine, the researchers found that when they treated tumor cells in which the Rb2 gene has been transplanted with gamma radiation, there was an increase of almost 50 percent in the ability of the cells to destroy themselves.

“One of the characteristics of the tumor cells is, at a certain point, the ability of the cell to program its own death, which is called apoptosis,” says Antonio Giordano, Ph.D., M.D., head of the Sbarro Institute and one of the study’s lead researchers. “In this case, we wanted to know if the introduction of the Rb2 gene into the tumor cell was creating apoptosis.”

Giordano says that in order to kill tumor cells through apoptosis, the cells can be treated with gamma radiation, but that this therapy doesn’t always have the desired effect.

In their study, the researchers transplanted a correct copy of the Rb2 into an aggressive brain tumor known as a glioblastoma using a vector that is sensitive to the drug tetracycline.

As part of the study, the researchers treated the tumor cells in which they had transplanted the Rb2 gene with gamma radiation. “When we looked at the possible synergistic role between gamma radiation and the Rb2 gene therapy, we saw that when we combine enhanced Rb2 expression with the gamma radiation treatment, there was an increase of almost 50 percent in the ability of the cells to die from apoptosis,” says Giordano, a professor of biology at Temple (http://www.temple.edu/news_media/hkg696.html), who discovered the Rb2 gene while working as a researcher at Temple’s Fels Institute for Cancer Research and Molecular Biology in the early 1990s. “So the gamma radiation at this point really helped in promoting quicker cell death in the cancer cells when it was combined with gene therapy.”

Giordano adds that the researchers concluded that the Rb2 introduction into gamma radiation-induced cells was also associated with the up- and down-regulation of other molecules involved in apoptosis, namely Bcl-2, an anti-apoptic factor, and p73, a tumor suppressor related to the p53.

“Rb2/130 at this point is known to inhibit tumor progression by interfering with the cell cycle and, as previously demonstrated, is involved in angiogenesis,” says Giordano. “But at this point, it is also able to control another important process in cancer and that’s apoptosis.

“With all of the data we’ve produced so far, clearly, we’ve built another step in demonstrating that Rb2/p130 indeed is a guardian of the genome and able to participate in all key normal cell processes,” he adds, “and therefore, it is becoming an essential target both for diagnosis and therapy.”