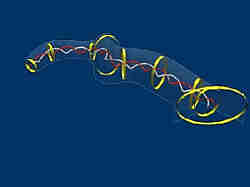 Researchers at Case Western Reserve University have discovered kinks in aggrecan, a widely studied protein at the submolecular root of arthritis, a finding that brings scientists closer toward new drugs and other interventions to prevent or alleviate the disease.

“Aggrecan acts to organize and densely pack sugar molecules that give cartilage its resilience,” said Steven Eppell, an assistant professor of biomedical engineering and director of the Nanoscale Orthopedic Biomaterials Laboratory at CWRU. “Our research shows that aggrecan is sharply bent in specific places and more flexible in other regions, and that the kinked areas may be more susceptible to the enzymes that degrade cartilage in osteoarthritis.”

Eppell worked with Brian A. Todd and Jayan Rammohan, graduate students in the CWRU department of biomedical engineering, using funding from the National Institute for Arthritis and Musculoskeletal Research. The researchers examined the protein structure using an atomic force microscope in the Center for Cardiovascular Biomaterials at CWRU. Using sophisticated image processing, the team mapped images of aggrecan onto the human genome and discovered that the kinks in their images lined up with places where aggrecan gets degraded in osteoarthritis. The result provides a link between aggrecan’s structure and its function in health and disease.

“Clarifying the functions of more than 30,000 proteins that make up the proteome is a major challenge in the wake of the human genome project,” Eppell said. “Studying human proteins and discovering how they interact inside their microscopic three dimensional world is a path leading scientists closer to linking a disease with its genetic characteristics. Trailblazing these paths requires us to investigate these proteins, one at a time, to learn how they interact inside their own three-dimensional world and in the body.”

According to the National Institutes of Health, osteoarthritis is the most common type of arthritis, especially among older people. The disease causes joint pain and limited movement because the surface layer of cartilage breaks down and wears away and allows bones under the cartilage to rub together, causing pain, swelling and loss of motion of the joint. Currently there is no well-accepted theory for what causes this disease.

“We are working vigorously to link the biological and mechanical properties of cartilage with its molecular structure,” Eppell said. “Ultimately, we are in search of clues that lead to intelligent drug design and other interventions to prevent or alleviate arthritis.”