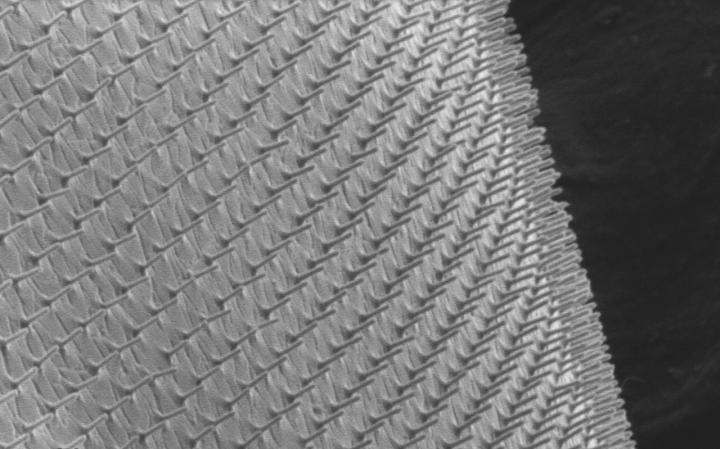 Purdue University researchers have created a drug delivery method using silicon nanoneedles with diameters 100 times smaller than a mosquito's needle. These nanoneedles are embedded in a stretchable and translucent elastomer patch that can be worn on the skin to deliver exact doses directly into cells. Credit: Purdue image

Purdue University researchers have developed a new flexible and translucent base for silicon nanoneedle patches to deliver exact doses of biomolecules directly into cells and expand observational opportunities.

“This means that eight or nine silicon nanoneedles can be injected into a single cell without significantly damaging a cell. So we can use these nanoneedles to deliver biomolecules into cells or even tissues with minimal invasiveness,” said Chi Hwan Lee, an assistant professor in Purdue University's Weldon School of Biomedical Engineering and School of Mechanical Engineering.

A surgeon performs surgery on the back of a hand of a patient who has melanoma. Purdue researchers are developing a new flexible and translucent base for silicon patches to deliver exact doses of biomolecules directly into cells and expand observational opportunities. The researchers say skin cancer could be one of the applications for the patches.

“These qualities are exactly opposite to the flexible, curved and soft surfaces of biological cells or tissues,” Lee said.

Lee said the researchers have resolved that problem.

“To tackle this problem, we developed a method that enables physical transfer of vertically ordered silicon nanoneedles from their original silicon wafer to a bio-patch,” Lee said. “This nanoneedle patch is not only flexible but also transparent, and therefore can also allow simultaneous real-time observation of the interaction between cells and nanoneedles.”

A study on the new procedure was published today (Nov. 9) in Science Advances. The collaborators from South Korea's Hanyang University and Purdue's Weldon School of Biomedical Engineering and School of Mechanical Engineering received joint support from the United States Air Force Office of Scientific Research and the Korean Ministry of Science and ICT to complete this study. The nanoneedles are partly embedded in a thin flexible and transparent bio-patch that can be worn on the skin and can deliver controlled doses of biomolecules.

Lee said the researchers hope to develop the patch's functionality to act as an external skin patch, lowering the pain, invasiveness and toxicity associated with long-term drug delivery.

In this technology's next iterations, Lee said the researchers plan to test operational validity of the patch's capabilities monitoring cellular electrical activity or treating cancerous tissue.

This technology aligns with Purdue's “Giant Leaps” celebrating the university's global advancements made in health, space, artificial intelligence and sustainability highlights as part of Purdue's 150th anniversary. Those are the four themes of the yearlong celebration's Ideas Festival, designed to showcase Purdue as an intellectual center solving real-world issues.

The Purdue Office of Technology Commercialization has filed a patent for the technology.

About Purdue Office of Technology Commercialization

The Purdue Office of Technology Commercialization operates one of the most comprehensive technology transfer programs among leading research universities in the U.S. Services provided by this office support the economic development initiatives of Purdue University and benefit the university's academic activities. The office is managed by the Purdue Research Foundation, which received the 2016 Innovation and Economic Prosperity Universities Award for Innovation from the Association of Public and Land-grant Universities. For more information about funding and investment opportunities in startups based on a Purdue innovation, contact the Purdue Foundry at foundry@prf.org“>foundry@prf.org. For more information on licensing a Purdue innovation, contact the Office of Technology Commercialization at otcip@prf.org“>otcip@prf.org.

Flexible elastomer patch with vertical silicon nanoneedles for intracellular and intratissue nanoinjection of biomolecules Hyungjun Kim, Hanmin Jang, Bongjoong Kim, Min Ku Kim, Dae Seung Wie, Heung Soo Lee, Dong Rip Kim, Chi Hwan Lee *Purdue University Weldon School of Biomedical Engineering and School of Mechanical Engineering, Hanyang University School of Mechanical Engineering Vertically ordered arrays of silicon nanoneedles (Si NNs), due to their nanoscale dimension and low cytotoxicity, could enable minimally invasive nanoinjection of biomolecules into living biological systems such as cells and tissues. These Si NNs have been realized on a bulk Si wafer through standard nanofabrication technology, yet there exists large mismatch at interface between the rigid, flat and opaque Si wafer and the soft, curvilinear and see-through biological systems. Here we report a unique methodology that is capable of constructing vertically ordered Si NNs on a thin layer of elastomer patch, in order to flexibly and transparently interface with biological systems. The resulting outcome provides important capabilities to form a mechanically elastic interface between the Si NNs and biological systems, and simultaneously enable direct imaging of their real-time interactions under the transparent condition. Herein, we demonstrate its utility in intracellular, intradermal and intramuscular nanoinjection of biomolecules into various kinds of biological cells and tissues at their length scales.