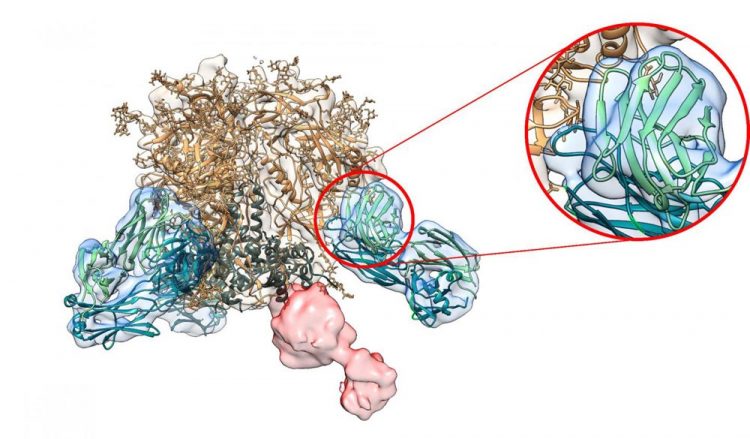 With the new method, the researchers were able to image polyclonal antibody/HIV envelope complexes at 4.7Å resolution. At this resolution, the researchers discovered that in rabbits, antibodies specific to a vulnerable sites on HIV's outer glycan layer (blue shapes) are structurally highly convergent and closely resemble a previously isolated monoclonal antibody 10A (green and teal ribbons). I Image courtesy Hangartner, Ward labs, Scripps Research

A team at Scripps Research has come up with a faster way to analyze the outcome of experimental vaccines against HIV and other pathogens. Their new system lets scientists quickly assess the full spectrum of antibodies produced in an individual in response to a pathogen or vaccine and determine if these antibodies are likely to be effective against the pathogen.

“We can now watch antibody responses evolve almost in real time,” says Lars Hangartner, PhD, a Scripps Research associate professor and co-senior author of the study, which published today in the journal Immunity.

Vaccines work by tricking the body into producing neutralizing antibodies against a future invader. Testing vaccines tends to be a lengthy process, with an initial immunization and then a series of booster shots over weeks or months. The time it takes to analyze the trial data means scientists don't usually get to see if a vaccine is working until the experiment is over, making it especially hard to tweak treatment strategies in the face of emerging diseases.

With the new study, scientists finally have a way to get a nearly real-time picture of antibody evolution. The new technique builds on Scripps Research-led breakthroughs in immunology and an imaging technique called electron microscopy, which reveals the structures of antibodies bound to their target pathogens, such as HIV.

The researchers used rabbit blood samples collected at different stages of an HIV vaccine trial. The researchers purified the samples, breaking down the molecules until they could extract antibody fragments. They then mixed these antibody fragments with their targets-viral proteins-and imaged them in the electron microscope, revealing how the immune system was developing its attack on the pathogen.

“After fine-tuning the biochemistry behind the formation of immune complexes of HIV Env trimers with antibody fragments, we were able to establish a very solid protocol allowing for semi-quantitative electron microscopy analysis,” says study co-first author Matteo Bianchi, PhD, a former Scripps researcher now with the Institute of Medical Virology, University of Zurich.

This new method is based on images taken by a relatively low-tech method called negative stain imaging, which helped them spot promising, or more often than not, distracting, antibodies. At last, the researchers could quickly find out if a vaccine was pushing the immune system along the right path. And in cases where a vaccine wasn't working, the method could provide researchers with information as to how the vaccine could be improved.

“You can change the direction of a study depending on the results from this method,” says study co-first author Hannah Turner, a research assistant in the Ward lab. “Never before have we been able to take a snapshot of our antibodies like this-giving us a more complete picture of what is happening and how we can influence the vaccination process.”

For an even closer look at the antibodies, Ward used higher-tech cryo-electron microscopy to get high-resolution, 3-D images of the antibodies with their viral targets. These detailed snapshots revealed additional details that may help scientists improve future experimental HIV vaccines.

The researchers say their faster method could open the door to personalized design for vaccines. For example, this study included a “high-responder” rabbit that produced many effective antibodies, and a “low-responder” rabbit with a weak army of antibodies. Going forward, researchers could use this new method in human vaccine or therapeutic trials to quickly separate high responders from low responders early on, saving crucial time for patients and their doctors as they search for effective therapies and vaccines that provide herd immunity.

“This is going to be part of every immunization project I do from now on,” Ward says.

“This method has the potential to change the pace at which we can develop vaccines,” adds Hangartner.

The study was supported by the National Institutes of Health (grant UM1 AI100663 to Scripps CHAVI-ID), the Bill and Melinda Gates Foundation Collaboration for AIDS Vaccine Discovery (grants OPP1115782 and OPP1084519) and the Swiss National Science Foundation (grants PP00P3_146345 and P300PB_160969).

Scripps Research is ranked the most influential scientific institution in the world for its impact on innovation. A nonprofit research organization, Scripps expands basic knowledge in the biosciences and uses these fundamental advancements to develop profound innovations that improve well-being. Scripps researchers lead breakthrough studies that address the world's most pressing health concerns, accelerating the creation and delivery of medical breakthroughs to better human health across the globe. Our educational and training programs mold talented and committed students and postdocs into the next generation of leading scientists.