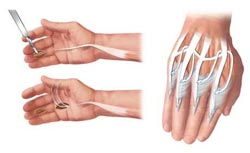 If the neck is broken and there is a cervical spinal cord injury, muscles in the arm and hand are paralysed. But in many cases some muscle functions remain, which makes it possible to transfer muscles and tendons and thereby restore a tetraplegic person’s grip function.

About 50 or so such hand operations are performed every year at the Sahlgrenska University Hospital, and patients come from both Sweden and Europe. There have been major advances in surgical techniques in recent years. For example, the method of connecting tendons is now so strong and can withstand such a heavy strain that the patient can start to exercise his or her grasp just one day after the operation.

A dissertation at the Sahlgrenska Academy, University of Gothenburg, describes a new method in which several operations can be combined and performed simultaneously in order to create both a grasp and release function of the hand in people with tetraplegia following a cervical spinal cord injury.

Compared with previously, when at least two operations were required to achieve the same functions, according to the thesis the simultaneous interventions can shorten the treatment period at the ward by an average of ten days for each hand, saving the patient at least three months of rehabilitation.

“The operation not only gives the patient a reconstruction of the pinch and grip function, but also the ability to open the hand,” says Carina Reinholdt, Senior Consultant in hand surgery and Doctor of Medicine at the Sahlgrenska Academy, University of Gothenburg.

“The fact that the patient can start exercising immediately also reduces the risk of adhesion formations and scarring around the transferred tendons. The post-operative results are also better: the grip strength is twice as strong and the ability to open the hand is better than in traditional, separate operations.”

For the patient, a reconstructed grasp function means greater independence. With a functional grasp, a paralysed person can feed himself/herself, take care of his/her own hygiene, use a computer or mobile phone more easily, and hold and greet people.

“In our everyday lives we encounter countless instances where you need a good grip and the ability to open your hand. For many patients, this operation has meant that they’ve been able to return to work on a part-time basis,” says Carina Reinholdt.