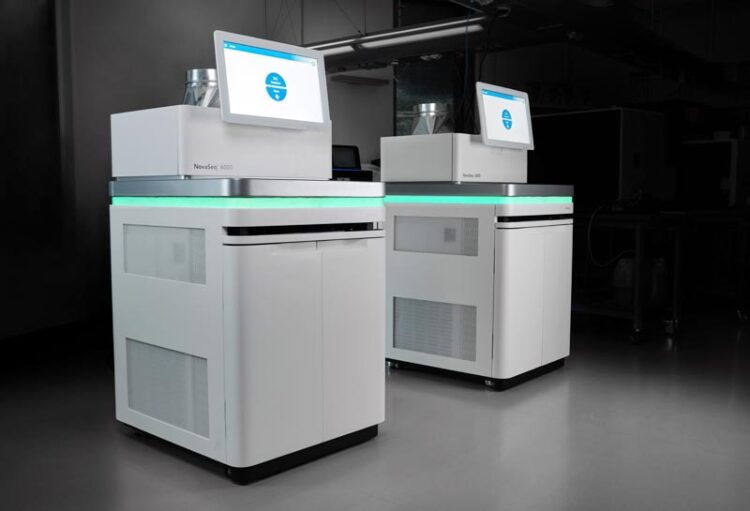 High-throughput sequencing can be used to determine the genetic information of an organism within a few hours.
© SoulPicture|Kiel, IKMB, Kiel University

The results of the international study involving the Cluster of Excellence PMI also point to a previously unknown process in the development of this chronic inflammatory bowel disease.

The special features of the study are its size as well as its methodological approach. In order to detect changes in the genome of patients with Crohn’s disease, an international consortium compared DNA samples from around 30,000 people with Crohn’s disease and a control group of 80,000 people without this disease. The goal was to find genetic variants that confer susceptibility to chronic inflammatory bowel disease (IBD). The method of investigation was so-called exome sequencing. This involves sequencing all protein-coding regions of the genome. Previously, particularly genome-wide association studies have looked for abnormalities in the genome of patients.

“In the new study, we identified genetic variants in ten genes that increase susceptibility to Crohn’s disease. Hereby, changes in six genes were identified in regions that had not previously been associated with Crohn’s disease,” explained Professor Andre Franke from the Cluster of Excellence “Precision Medicine in Chronic Inflammation” (PMI), who was involved in the study along with his working group. The results have been published in the renowned scientific journal Nature Genetics and provide new starting points for further research into the causes of the disease. “With the discovery of new risk genes, the group led by Professor Franke has helped us enormously at the hospital. These genes, which had not been detected in previous genomic studies, will lead to new approaches for therapeutic methods,” said PMI spokesperson Professor Stefan Schreiber, Director of the Department of Internal Medicine I at the University Medical Center Schleswig-Holstein (UKSH), Campus Kiel and Director of the Institute of Clinical Molecular Biology (IKMB) at Kiel University (CAU) and the UKSH, Campus Kiel.

Genetic studies are used to search for the causes of disease

Crohn’s disease (CD) severely impairs quality of life and is characterized by chronic inflammation of the gastrointestinal tract, which flares up in phases. The causes of the disease have not yet been sufficiently researched. It is thought to be triggered by an excessive immune response in genetically susceptible individuals. Although there are medications that help relieve symptoms in many people, there is no cure, and severe flare-ups of the disease are common.

Previous genome-wide association studies (GWAS) have identified more than 200 regions of the genome that are associated with Crohn’s disease. However, these studies are limited to certain variants that are already known. “In addition, these studies usually focus on changes that are not located in protein-coding regions. This makes it more difficult to identify the genes that are affected,” explained co-author Dr. Britt-Sabina Löscher, postdoctoral researcher in Franke’s working group at the IKMB. In order to complement GWAS, to better define biological goals and to identify rare variants, the large-scale exome sequencing study was conducted under the leadership of working groups from the Broad Institute at the Massachusetts Institute of Technology, Harvard University and the Wellcome Sanger Institute, Cambridge, USA. The study included samples from more than 35 centers worldwide, including those from the IBD cohort of the Cluster of Excellence PMI. This brought together samples from a total of around 30,000 patients and 80,000 people in the control group. These large numbers of samples are needed to detect rare variants that drive the disease.

“In addition to reiterating the central role of innate and adaptive immune cells as well as autophagy (the “recycling program” of cells) in CD pathogenesis, these newly associated genes highlight the emerging role of mesenchymal cells in the development and maintenance of intestinal inflammation. In this way, they help to identify the genetic causes of inflammatory bowel disease and provide starting points for the development of new treatments,” emphasized co-author Professor Stefan Schreiber. Mesenchymal cells are a type of stem cells in the intestine. They play a role in the maturation, migration and recruitment of immune cells. It appears that a disturbance of these cells contributes to intestinal inflammation.

Next-generation sequencing, or NGS for short, is a technology for high-throughput analysis of DNA, which is often used in modern genetic diagnostics for investigating genetic diseases. Using this method, all genes of the human genome can be sequenced in parallel to identify even the smallest changes, such as mutations. A blood or tissue sample from which the DNA can be obtained is sufficient for the examination. NGS can be used to analyze the genetic material, either the entire genome, or for example only the protein-coding region (exome).

Genome-wide association studies (GWAS) look for risk factors for diseases. In such studies, the researchers look at typical changes throughout the entire genome and see whether these changes are more common in people with certain diseases. For this purpose, several hundred thousand up to several million positions of the genetic material are analyzed with so-called biochips (SNP arrays). Only certain positions in the genome that are known to be variable are investigated. The altered genetic regions are not necessarily causally related to the disease. However, they are associated with it and are linked to it in a known or unknown way.

Photos are available for download at:
https://www.precisionmedicine.de/de/pressemitteilungen/pressebilder-2022/10-sequ…
High-throughput sequencing can be used to determine the genetic information of an organism within a few hours.
© SoulPicture|Kiel, IKMB, Kiel University

https://www.precisionmedicine.de/de/pressemitteilungen/pressebilder-2022/10-loes…
Dr. Britt-Sabina Löscher, member of the Cluster of Excellence PMI and postdoc at the Institute of Clinical Molecular Biology, CAU, UKSH.
© private

https://www.precisionmedicine.de/de/pressemitteilungen/portraitbilder/schreiber-…
Prof. Dr. Stefan Schreiber, spokesperson of the Cluster of Excellence PMI, Director of the Institute of Clinical Molecular Biology at the CAU and UKSH, and Director of the Department of Internal Medicine I, UKSH, Campus Kiel.
© J. Haacks, Kiel University

The goal is to translate interdisciplinary research findings on chronic inflammatory diseases of barrier organs to healthcare more intensively, as well as to fulfil previously unsatisfied needs of the patients. Three points are important in the context of successful treatment, and are therefore at the heart of PMI research: the early detection of chronic inflammatory diseases, the prediction of disease progression and complications, and the prediction of individual responses to treatment.

Link to the press release:
https://www.precisionmedicine.de/en/details/news/large-scale-study-finds-ten-new…