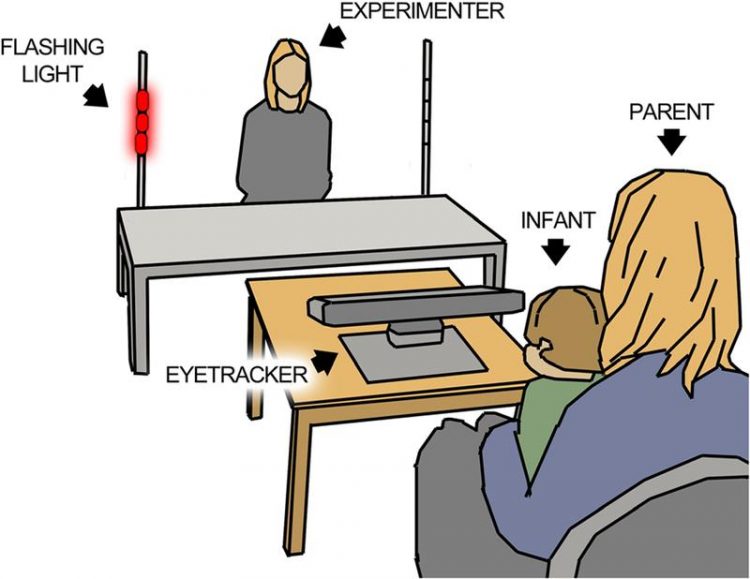 Illustration of the experiment designed to assess initiation of joint attention in infancy. Illustration: Pär Nyström

In the new study, the researchers investigated joint attention skills in 10-month-old infants. Joint attention means that one attends to the same objects and events as other people, which is critical both when infants learn about their environment and for their language development.

For example, by pointing or vocalizing the young child can guide the adult’s attention and shape his/her own immediate social environment to fit his/her needs and interests.

Importantly, already before infants can point or speak, they may use their eye movements to influence the parent, by alternating gaze between the face of the parent and objects that have caught their attention.

The current study assessed this particular type of preverbal communicative behavior in infancy,” says Pär Nyström, researcher at Department of Psychology, Uppsala University and one of the authors on the new study.

The study included infants who had an older sibling with autism. Most of these infants develop typically, yet the probability of later being diagnosed with autism is considerably higher in this group than in the general population.

The infants were tested in playful experiments designed to elicit different types of joint attention behaviors. During the session, an eye tracker measured where the infants looked.

The infants were seated on their parents lap facing the experiment leader, when a lamp apparently out of sight of the experimenter suddenly started to flash (see illustration). The lights were flashing for 10 seconds, to provide the infant with an opportunity to initiate joint attention.

Infants who later developed typically, tended to look frequently back and forth between the flashing light and the experimenter, as if they were trying to attract their attention and share this experience with the adult. In contrast, the infants who later were diagnosed with autism produced much less such communicative gaze shifts at 10 months of age, a critical age for the development of social cognition.

“These results suggest children with autism, as infants, may not themselves create as many opportunities for social learning as other children. The differences were rather subtle, but fully detectable with modern eye tacking technology.

It is important to note that the results demonstrated significant group differences only, and it is too early to say whether the method can facilitate early detection in a clinical context,” says Terje Falck-Ytter, Associate senior lecturer at Department of Psychology and Uppsala Child- and Babylab, Uppsala University and principal investigator for the study.

In contrast to the findings regarding initiation, the study showed that all infants tended to follow the experimenter’s gaze spontaneously. Strikingly, they were able to do so even when the experimenter only moved her eyes, while the head remained stationary.

“The contrasting findings between responding to and initiating social communication may be informative for future research into early intervention”, says Terje Falck-Ytter.

The study is a part of the larger project Early Autism Sweden (EASE) (www.smasyskon.se), which is a collaboration between Uppsala University and the Center of Neurodevelopmental Disorders at Karolinska Institutet (KIND) in Sweden. The participants joint attention skills were examined at 10,14, and 18 months of age.

At three years of age a full diagnostic evaluation was conducted. In total, 81 infants with an older sibling with autism took part in the study, of whom 22 met criteria for autism at follow-up. The study also included a control group consisting of 31 infants from the general population.