Home / Health and Medicine / Immunologists from the University of Bonn topple dogma
14.02.2014

Immunologists from the University of Bonn topple dogma 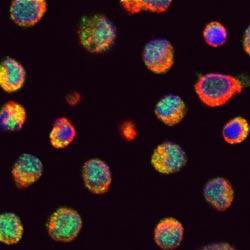 To date, immunologists have assumed that the macrophages functioning as “scavenger cells” can be classified into two different forms. In an extensive search, the researchers have now discovered that these immune cells turn into far more different manifestations.

These findings also give rise to completely new therapeutic approaches for many widespread diseases. The results are now being published in the renowned journal “Immunity”.

In the body, macrophages go on patrol as “scavenger cells” and act to eliminate intruders. According to the commonly held belief in immunology, they are divided into two groups, firstly into “classical macrophages” which spur on inflammatory processes, and secondly into “alternative macrophages” which shut down inflammation. Researchers from the University of Bonn, together with their colleagues at the University of Bonn Hospital and from Worcester (USA) and Edinburgh (Scotland) are now toppling this dogma: In a breakthrough discovery, the scientists disprove this simple classification for the scavenger cells.

“Many macrophages do not fit this pattern,” says Prof. Dr. med. Joachim L. Schultze from the Life & Medical Sciences (LIMES) Institute of the University of Bonn. “Rather, this simple concept stands in the way of innovative therapeutic approaches.” According to the researchers' results, the macrophages react to many different stimuli, for example messengers which they process in the most complex way, like a computer. Therefore they do not just differentiate between macrophages which fuel inflammation or anti-inflammatory macrophages, as previously believed. Rather, the scientists have found at least nine different forms which use their weapons to optimally fight intruders in different ways.

The scientists from the LIMES Institute of the University of Bonn used blood samples from different people in order to obtain as many different macrophages as possible from the precursor cells in the samples using various growth factors. While these scavenger cells mature, certain genes are activated in their DNA. The researchers identify which genes these are by means of so-called RNA which functions in the cell as a genetic messenger. “With complex bioinformatic analyses, we obtained a type of fingerprint for each macrophage which showed us which genes in the cell were directly active,” reports Prof. Schultze. Using this genetic fingerprint, the scientists were able to deduce which combination of stimuli led to the macrophage developing in a particular direction.

For their bioinformatic data sets, the researchers then performed the acid test: Macrophages were obtained from the lungs of smokers and compared with the same scavenger cells in healthy lungs. It could be seen that the macrophages from smokers' lungs could not be allocated to either the kind that fuels inflammation or to the anti-inflammatory type. The scientist is convinced that “We have to step away from the simple classification of macrophages and investigate them more closely in respective connections with diseases.” “When we depart from the conventional pattern, fully new concepts open up.”

Much about the activation of macrophages and thus about classical immune reactions can be discerned from the genetic fingerprints. “This is the dawn of new therapy options,” says Prof. Schultze. Because macrophages play a role in many widespread diseases including, for example, arteriosclerosis, obesity, diabetes, asthma, Alzheimer's disease and cancer.