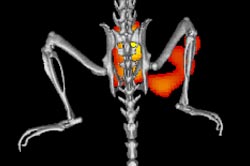 Evidence of a staphylococcal infection in the leg muscle of a mouse with the new fluorescent agent vanco-800CW. A fluorescence signal can be seen beneath the pelvis of the animal because the agent collects in the bladder before it is excreted in urine.<br><br>Image: Kevin P. Francis, Caliper (Alameda, California, USA)<br>

Staphylococci are bacteria that are particularly feared in hospitals. This is because a staphylococcal infection can be life-threatening for patients whose immune system is weakened, as is the case, for example, after a major procedure such as an organ transplant. Staphylococci pose special problems since they are also resistant to various antibiotics.

Such infections are also dangerous for patients who receive artificial joints, for instance, or other implants. With implants, in particular, there is a risk of the bacteria forming so-called biofilms on top of them: the microbes surround themselves with a mucus sheath, which protects them very well against medication.

Possible consequences of an infection

“If an infection of this kind gets out of hand, the implant may have to be surgically removed again,” says Knut Ohlsen from the Institute for Molecular Infection Biology at the University of Würzburg. After that, the infected region is “remediated” before a new implant can be inserted. All in all, this is a lengthy process and one that is very stressful for the patient.

So, it is important to identify implant infections as early as possible. Now, for the first time, research teams from the University of Groningen in the Netherlands are presenting a suitable method in the journal “Nature Communications”. Knut Ohlsen and Tina Schäfer from the University of Würzburg helped develop it.

How the new “tracker” works

The scientists have developed an agent that could be described as a “fluorescent tracker”: it locates even the smallest quantities of harmful staphylococci in the body and marks them so that they can be identified from outside with a special camera. The “tracker” is the common antibiotic Vancomycin coupled to a new fluorescent dye.

The technique has proven its suitability in experiments with mice. If it can also be used in humans, it may be possible to avoid implant infections and secondary operations in the future: if there are any signs of an infection after an implant has been inserted, such as a fever or abnormal protein in the blood, the “tracker” could be administered to the patient as a contrast agent. Then, using a video camera that records the agent’s fluorescence signals, the location and extent of the infection could be determined immediately and countermeasures introduced.

The new agent called vanco-800CW is now set to be developed further for use in humans under the direction of the Dutch researchers. Corresponding clinical trials are being planned.

What was done in Würzburg

As part of the project, Tina Schäfer and Knut Ohlsen examined the suitability of the new agent. Which bacteria does the fluorescence-labeled Vancomycin provide any evidence of and how well can its fluorescence be shown with different detection techniques? These questions were answered in Würzburg. Fluorescence imaging is a focus of research activity at the Institute for Molecular Infection Biology. The work is funded by the German Research Foundation (DFG) in Transregional Collaborative Research Center 34.