How do krill survive the Antarctic winter? 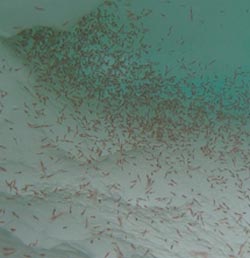 Scientists from the Alfred Wegener Institute together with international colleagues could analyse the distribution and behaviour of larval and juvenile krill beneath wintery Antarctic sea ice for the first time.

In order to decrypt the life cycle of this ecologically important species 51 scientists and technicians as well as 44 crewmembers sailed the Weddell Sea for 63 days. The expedition, which started in Punta Arenas (Chile) ends in Cape Town (South Africa) on Wednesday, 16 October.

Every winter the sea around Antarctica freezes, forming a new solid surface 19 million square kilometres in extent. This area has nearly twice the size of the U.S., but is so vast scientists have only very rarely visited it. The research icebreaker Polarstern is one of only a few worldwide, which is able to operate in this region even during winter. This is why Polarstern enables searching for clues to one of the big mysteries of Antarctic biology: How do krill survive the winter, when there is little to eat in the water column?

Antarctic Krill (Euphausia superba) are shrimp-like crustaceans that are key to the whole Antarctic food web. The aim of the expedition was to explore the environment under the sea ice in order to throw light on the role it plays in the life cycle of Antractic krill. Therefore chief scientist Dr. Bettina Meyer from the Alfred-Wegener Institute, Helmholtz Centre for Polar and Marine Research (AWI) put together an international team of experts to study krill under sea ice.

“Krill have the largest biomass of any wild animal on Earth,” says AWI-scientist Meyer. They are a key food source for all the iconic Antarctic species, such as whales, seals and penguins. But there has been a marked decline in krill abundance in recent decades – a decline that seems to be linked to changes in the timing and extent of sea ice formation as parts of Antarctica warm.

Making use of Polarstern’s ability to break into the winter ice pack, the scientists set up dive camps on two different floes and sent a team of scientific divers, as well as a remotely operated mini-submarine (ROV), under the ice to make measurements and record video imagery. “The footage was really extraordinary,” says Meyer. “We saw that the under ice environment can be very complex, with caves and terraces formed where one floe has rafted over another. It’s not one habitat, but a series of micro-habitats, similar to an upside-down reef,” explains Dr. Ulrich Freier, the head of the eight-member scientific diving group.

“The light which penetrates the snow and ice generates a breath taking atmosphere comparable to the colours inside a gothic cathedral,” says Freier, “blues and greens from the ocean, the white ice and browns and yellows, indicating the on-going biological processes already in late winter on the southern hemisphere.” Dr Klaus Meiners from the AAD explains: “The colours are caused by algae growing in the ice.” He used a radiometer (a device that measures the spectra of light falling on it) mounted on the ROV to quantify the algae’s biomass within the ice.

Importantly, the expedition scientists discovered huge swarms of krill larvae and juvenile krill closely associated with the ice. In places the density reached ten thousand animals per square metre. “The distribution is very patchy. They seem to prefer the caves and terraces of the over-rafted areas, which are sheltered regions where the larvae can feed,” says Meyer.

During the day the scientists filmed the krill larvae directly feeding on the ice, but the picture was different at night, when the krill seemed to abandon the ice surface and descend in the upper 20 metres into the water column, perhaps to hide from predators, which come up to the surface at night. “The first time ever we were able to observe this daily migration of young krill stages. It happened at precisely the same time each evening”, explains Dr. Mathias Teschke from the Alfred Wegener Institute. “Their disperse distribution in the water column might prevent them from predation”, presumes chronobiologist Teschke. “This suggests that krill larvae may have an internal clock,” says Teschke, who will analyse the DNA of frozen krill larvae at the AWI to investigate this possibility.

The findings of the expedition confirm the importance of sea ice to the life cycle of krill. But, according to expedition leader Meyer, the timing of sea ice formation may be as important as the extent of the sea ice. “Krill seem to need sea ice which forms early enough in the year to incorporate high amounts of biomass, and to raft and deform to create the micro-habitats the krill prefer.” As scientists try to predict the effects of climate change on the Antarctic ecosystem, they will need to take such complexities into account.

Follow the Alfred Wegener Institute on Twitter (https://twitter.com/#!/AWI_de) and Facebook (http://www.facebook.com/AlfredWegenerInstitut) to obtain all current news and information on everyday stories from the life of the Institute.