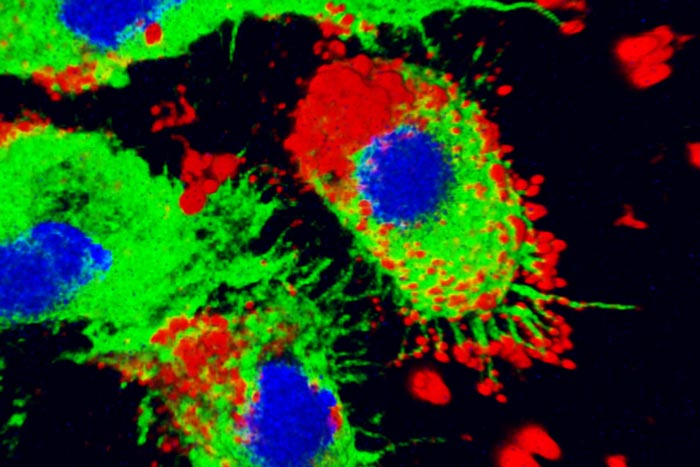 Nanoparticles (red) are taken up by immune cells (green with blue nuclei). Researchers at Washington University School of Medicine in St. Louis have shown that an experimental nanoparticle-based drug therapy protects mice from sudden death due to the rupture of a major blood vessel in the abdomen, pointing the way toward a new strategy for treating deadly abdominal aortic aneurysms.
Credit: Huimin Yan/Washington University

Could lead to therapies for people at risk of sudden rupture due to abdominal aortic aneurysm.

An experimental drug therapy protects mice from sudden death due to the rupture of a major blood vessel in the abdomen, according to a study from researchers at Washington University School of Medicine in St. Louis.

The findings, available online in Biomaterials Advances, may lead to a new strategy in treating abdominal aortic aneurysm, a condition in which the wall of the abdominal aorta — a major vessel that carries blood from the heart to the rest of the body — starts to weaken and bulge outward. The weak spot can start leaking blood or even rupture without warning, triggering a life-threatening emergency that nearly always results in death if not treated promptly. The larger the aneurysm, the more likely it will suddenly burst.

“When people are identified with a medium or small aneurysm, we monitor them,” said senior author Christine T. N. Pham, MD, the Guy and Ella Mae Magness Professor of Medicine and director of the Division of Rheumatology. “Large aneurysms can be repaired surgically, but for smaller aneurysms, there’s no treatment other than waiting for them to get to a size that can be repaired surgically. Our findings in mice illustrate a potentially relevant therapy that could prevent rupture of aneurysm.”

About 200,000 people are diagnosed with abdominal aortic aneurysm, or triple A, in the U.S. every year, mostly older men who smoke. Usually, such aneurysms cause no symptoms until they suddenly and catastrophically rupture, causing 15,000 deaths a year in the U.S. alone. The U.S. Preventive Services Task Force — an independent panel of experts in disease prevention and evidence-based medicine supported by the U.S. Department of Health and Human Services — recommends that all men ages 65 to 75 who have ever smoked receive ultrasound scans to screen for triple A.

Scientists have known for decades that inflammation in blood vessels drives the progression of triple A, but attempts to treat the disease using immunosuppressive therapies have not panned out. The immune system is a crucial part of the body’s defenses against infection. It is difficult to find the delicate balance between suppressing inflammation in the aorta enough to stop aneurysms from worsening, while not suppressing the immune system in the rest of the body to the extent that doing so puts a person at risk of serious infections.

In this study, the researchers used nanoparticles to deliver anti-inflammatory payloads directly to inflamed blood vessels. The nanoparticle is based on a fragment of a protein called melittin and optimized to carry the payload: small bits of RNA. The modified protein fragment forms a complex with RNA that, when given to the mice, accumulates primarily in inflamed tissues. There, the protein fragment unloads the bits of RNA and assists their entry into cells’ main compartment, where the RNA suppresses inflammation by interfering with the expression of an important inflammatory protein, NF-kappaB.

The researchers used the nanoparticles to carry so-called small interfering RNAs (siRNAs) targeting two subunits of NF-kappaB: p50 and p65. The researchers studied male mice that developed a triple A-like condition that ruptures about half the time. They treated the mice with nanoparticles containing p50 siRNA, p65 siRNA or an irrelevant siRNA for comparison. Suppressing p50 did not halt the progression of the aneurysms, but significantly increased the mice’s chances of survival, from 53% to 85%. Treatment also delayed onset of rupture, from day seven to day 12. In contrast, suppressing p65 did not have significant effect.

“Optimization of the nanoparticle allowed us to use a fraction of the previously established dose of siRNA, which means we can achieve therapeutic effect at a level that is less likely to cause adverse effects,” Pan said. “By targeting p50 and p65 separately, we pieced out the individual contributions of the different subunits and found the one (p50) that we think will be more protective with less potential adverse effects. Altogether, these results are very encouraging. They suggest that it may be possible to develop a therapy to reduce the risk of rupture and death from triple A without unacceptable adverse effects.”

Wickline is the principal investigator and Pham the Washington University site lead on a Small Business Technology Transfer grant from the National Institutes of Health (NIH) involving the original nanoparticle technology created by Wickline and his team at Washington University. The grant supports a project to develop and commercialize the technology as a treatment for inflammatory disease in collaboration with Altamira Therapeutics.

“For that grant, we are looking at rheumatoid arthritis, not triple A,” Pham said. “But once you have the technology approved for one disease, it is a lot easier to apply it to other diseases. I’m hopeful that one day, in the not-too-distant future, we’ll have a treatment to offer people to stabilize the aneurysm, reducing the risk of rupture and sudden death. The technology is still being tested, but there’s more hope now.”

SAW declares ownership interests in Altamira Therapeutics, Inc. HP declares stock options in Altamira Therapeutics. The rest of the authors declare no competing interests. Patents: Universal Anchor peptide for nanoparticles (April 2011; USPTA #12/910,385); Compositions and Methods for Polynucleotide Transfection (granted 22.08.2018) pct/us2014/010212, wo 2014/107596, ep 2 941 273 b1; Peptide-Polynucleotide-Hyaluronic Acid Nanoparticles and Methods for Polynucleotide Transfection (May 10, 2019; USPA #62/845,974). SAW and HP’s competing interests did not influence the work reported in this study, which was conducted independently in CTNP’s laboratory.