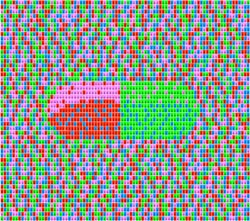 In a subsequent pharmacological study with one of the identified compounds, the scientists found a drug-induced reduction of aversive memory. This could have implications for the treatment of posttraumatic stress disorder, which is characterized by intrusive traumatic memories. The findings have been published in the latest edition of the magazine PNAS.

In the last decade, the human genome project has led to an unprecedented rate of discovery of genes related to humane disease. However, so far it has not been clear to what extent this knowledge can be used for the identification of new drugs, especially in the field of neuropsychiatric disorders. The research groups of Prof. Andreas Papassotiropoulos and Prof. Dominique de Quervain of the Psychiatric University Clinics, the Department of Psychology and the Biozentrum of the University of Basel performed a multinational collaborative study, in order to analyze the genetic basis of emotionally aversive memory – a trait central to anxiety disorders such as posttraumatic stress disorder. In a gene-set analysis the scientists identified 20 potential drug target genes that are involved in the process of remembering negative events.

Known Antihistamine shows Effect
In a double-blind, placebo-controlled study and based on the results of the genetic analysis, the scientists examined a compound that interacts with one of the previously identified gene products. Surprisingly, the said compound is a known antihistamine. A single dose of the drug led to significant reduction of memory recall of previously seen aversive pictures; however, it did not affect memory of neutral or positive pictures. These findings could have implications for the treatment of posttraumatic stress disorder.

With this study, the scientists were for the first time able to demonstrate that human genome information can be used to identify substances that can modulate memory. «The rapid development of innovative methods for genetic analysis has made this new and promising approach possible», says Papassotiropoulos. The scientists are now planning subsequent studies: «In a further step, we will try to identify and develop memory enhancing drugs», explains de Quervain. The scientists hope to provide new input for the development of urgently needed improved drugs for the treatment of neuropsychiatric diseases.