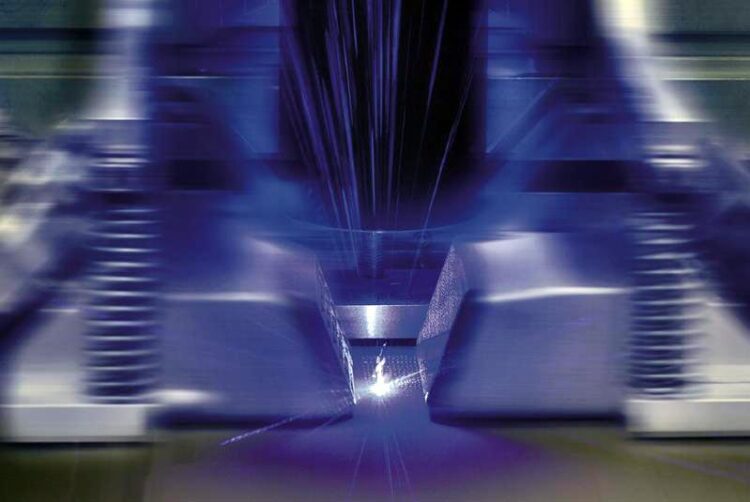 Copper is often used in electromobility, a material that can be processed at greater stability with blue or green lasers than with infrared lasers.
Fraunhofer ILT, Aachen, Germany

After having to take a pandemic break of four years, the industrial laser technology community met at “AKL’22 – International Laser Technology Congress” in Aachen from May 4 to 6, 2022. The industry is doing well, and the biggest trend is the extensive digitalization of processes. At the same time, common beam sources are being pushed to ever new levels of peak performance. New to the conference program was the Quantum Technology & Photonics Forum, where major German companies presented an amazing range of topics.

“The mood in photonics is good, and the prospects are very good,” is how Constantin Häfner, Director of the Fraunhofer Institute for Laser Technology ILT in Aachen, described the sentiment in the market. Current drivers are, in particular, laser-based production solutions for microelectronics, e-mobility and energy storage. “In competition with the rest of the world, the German industrial and research landscape can score points in process know-how, but it also became clearly visible that we still have to take a step forward in digitalization.” This is how Häfner summed up his impressions at the end of the conference.

If it weren’t for various supply chain problems, the industry would probably be talking about new records. In China, the world’s largest laser market, the market volume increased by 18.3 percent to reach almost $13 billion in 2021 according to Bo Gu (BOS Photonics), who spoke during the Technology Business Day at AKL’22. Jürgen Rumberger (TRUMPF Laser- und Systemtechnik GmbH) was much more cautious in his assessment of the situation in Germany. In the short term, he saw different trends in the major world markets: a decline in the automotive sector and growth in medical technology and consumer electronics. The situation will continue to improve in the medium term, he said, when the supply chains are functioning again.

A highlight of the program this year was once again the Gerd Herziger session, named after the founder of Fraunhofer ILT. There, Institute Director Constantin Häfner gave an overview of the major trends in industrial laser technology: sustainability and digitalization. Häfner emphasized the need for an adapted, sustainable globalization strategy: “Through sustainable digital Photonics Production as a key factor for technological sovereignty, innovation, resilience and agility, we can reduce the dependence of produc-tion, markets and resources on geographical constraints. At the same time, this allows us to exploit innovation potential through global diversification and thus increase our competitiveness.” Fittingly, he announced the opening of two new laboratories at Fraunhofer ILT, one for hydrogen and one for battery technology.

In the panel discussion that followed, TRUMPF’s CEO Laser Technology Christian Schmitz took up the topic of “laser as commodity”. While cheap lasers make new applications possible, he still sees a large enough “playground for physicists and engineers” to consolidate the pioneering role of improved lasers in the market. Schmitz sees innovation today primarily in process knowledge. One example is likely to be TRUMPF’s new technology for cutting display glass, which can make steps in the edge, even in glass less than 1 mm thick.

Mark Sobey (EVP, COO, Industrial Lasers and Systems, Coherent Inc.) gave an outlook on the opportunities Coherent sees in the automotive and semiconductor markets. He focused on the unification of the two markets, for example in chips and displays for electromobility. Plenty of lasers will be required to manufacture batteries, sensors and infotainment systems, but the industry does not need new beam sources, but rather to improve their scaling and stability. Here, 24/7 operation and global service are the is-sues.

Volker Krause, who was still advised by Gerd Herziger when he founded his company Laserline, looked at a core topic in beam sources: the scaling of individual laser diode emitters. Over the past decades, this has resulted in an almost linear increase in power per emitter, while prices per watt and beam parameter product have fallen exponentially. Both developments are likely to be decisive for the success of fiber and diode lasers. For the latter, Laserline is also exploring new applications, such as anti-fouling treatment of ship hulls with blue laser diodes. This can reduce not only the amount of toxic chemicals needed in conventional processes, but also significant amounts of fuel.

One big trend is certainly the use of process data from industrial laser systems, and Jens Ottnad (Head Data and AI at TRUMPF Machine Tools) has added an interesting point to this: Classic machines wear out. Machines with data acquisition collect process data and thus enable improvement, a kind of “write-up instead of write-off”. A paradigm shift that fits well in the context of decreasing batch sizes with increasing complexity.

Parallel to the continuous recording of process and machine data, new concepts such as “pay-per-part” are also being tested at TRUMPF. Here, the machine remains the property of the manufacturer, and the customer only pays for its use per part. In addition to the question of the whereabouts of the data, the topic of service takes on a new dimension: TRUMPF’s machine in Switzerland runs largely autonomously; in case of doubt, an oper-ator in Germany is available for remote maintenance.

USP lasers from research to the factory floor

The advantage of the laser – that it can deposit energy on the workpiece without contact – is fully exploited today. The technology is so mature that laser parameters can be optimally adapted to the respective process. At the same time, performance and reliability have been continuously improved over the last 20 years, as Michael Lee (IPG Photonics) impressively demonstrated, using kW fiber lasers as an example. In addition to laser scalability, process knowledge is now the decisive factor for new applications. The intro-duction is facilitated by better and better models, which are further developed with bet-ter and better measurement data.

One field where laser power parameters are still growing substantially is ultrashort pulse (USP) lasers. Within the Fraunhofer Cluster Advanced Photon Sources CAPS, new rec-ords are constantly being set, as CAPS speaker Dieter Hoffmann showed: “In the mean-time, 10 kW are available in the CAPS application laboratory. All amplifier technologies from fibers to slabs and disks are being tested for this purpose.” Outputs of 5 to 10 kW are being tested, for example, for structuring battery electrodes. In the Aachen application laboratory, there are 30 – 50 mJ pulses at repetition rates around 1 MHz for these applications. Interested users from industry can test initial application trials with the pro-totype lasers directly on site.

Research is also investigating new wavelengths for USP lasers, with Sebastian Nyga from Fraunhofer ILT presenting a system emitting at 3 µm for processing polymer and carbon fiber materials. Systems at 2 µm to 6 µm or even up to 14 µm wavelengths were pre-sented in other talks. The wavelengths are relevant for the processing of transparent materials.

Green or blue – what does the market need?

Copper is often used in electromobility applications, a material that can be processed at much greater stability with blue or green lasers than with infrared lasers. At AKL’22, the difference between blue and green was presented as marginal. Improving beam quality is currently much more important. Far greater power is needed in the beam sources to scale the processes. In the kW range, no upper limit is currently apparent.

Laser diodes are actually the “hidden champions” of industrial laser technology. Not only do they deliver high power and enormous efficiency gains, but they continue to be a significant part of the innovation in the industry. Ralf Hülsewede (Jenoptik Optical Systems) presented such an innovation: passively cooled single bars with 400 W output power and up to 60 percent efficiency. With active cooling, even higher outputs per bar are possible. From ams Osram there were blue laser bars with 100 W on display, a result of the highly successful Effilas joint project.

“It is overwhelming to come together again in this form,” is how Dieter Hoffmann, Head of the Department Laser and Laser Optics at Fraunhofer ILT summarized his impressions. “On this occasion, you only realize all the things that were not possible in the home office.” Many contacts were renewed in Aachen or made in the first place. The variety of topics was impressive and the mix was particularly interesting: from new laser beam sources to laser material processing and the digitalization of process chains to quantum technology. There is a spirit of optimism in the quantum field; Infineon showed no less than three of its own approaches for the development of quantum computers. The challenges in today’s manufacturing were discussed intensively. Digitalization is the opportunity there, and sustainability is the demand of the hour. All participants agreed on one point: the industry urgently needs qualified young people. This is a challenge for all players in science and industry. In spite of all the intensive technical exchange, the joy of the meeting dominated. The next International Laser Technology Congress will take place from April 17 to 19, 2024.