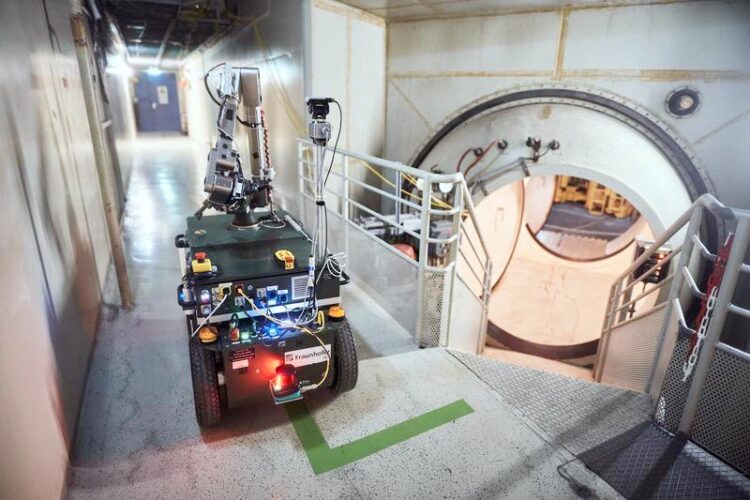 Practising for the real thing: at the European Robotics Hackathon, teams from all over the world will meet in Austria in June 2023.
(c) Fabian Vogl / Fraunhofer FKIE

Robotics experts from all over the world meet at EnRicH 2023.

Planning has already been underway since the summer: For the fourth time, the Fraunhofer Institute for Communication, Information Processing and Ergonomics FKIE is organising the European Robotics Hackathon (EnRicH) together with the Austrian Armaments and Defence Technology Agency (ARWT). EnRicH will take place in June 2023. For about a week, teams from all over the world will come together near Vienna to check the current development status of their robotic systems in various emergency scenarios. The venue is as unusual as it is unique worldwide: the nuclear power plant (NPP) in Zwentendorf, which never went into operation.

For Dr Frank E. Schneider, deputy head of the “Cognitive Mobile Systems” department at Fraunhofer FKIE, realism is a success factor for the event, which he has organised every two years since 2017 together with his team and in cooperation with ARWT. “A realistic operational scenario in a realistic environment under real conditions: That’s what we want to offer the participating teams at EnRicH,” he says.

In addition, EnRicH addresses a red-hot task, because the risk of an accident cannot be completely ruled out in any nuclear power plant – as the most recent examples in the nuclear power plant in Zaporizhzhya in the Ukraine or in Fukushima in Japan showed. In Europe’s nuclear plants alone, more than 40 incidents have occurred since 2000. However, due to the high radiation load, many of the operations required in the event of a disaster cannot be carried out by humans, but only by robots. “First of all, EnRicH is not meant as a competition,” Schneider clarifies. “Rather, it is a kind of performance comparison that helps to demonstrate the capabilities and deficits of robotics in such an incident scenario.”

Challenging tasks for all EnRicH teams

The scenarios and tasks that the EnRicH teams have to solve are demanding. The venue alone is a guarantee for realism and an absolutely unique feature: shortly after its completion in 1978, the commissioning of the Zwentendorf nuclear power plant was stopped by a referendum and it was never connected to the grid. At the same time, the Austrian nuclear reactor is of the same type as the nuclear power plant in Fukushima, where one of the largest reactor disasters occurred in 2011. Almost complete darkness in the building, tight corners, narrow rooms, steep staircases and metre-thick concrete and steel walls hindering any radio communication are part of the difficult environment for the teams and their systems. In addition, EnRicH involves practising with real radioactive material provided by the Austrian Armed Forces.

The participants compete in three disciplines: One task is to explore the infrastructure, map it as precisely as possible and create a radiation map. In the “Manipulation” discipline, the task is to identify radiation sources in a specially constructed pipe system and close valves. Finally, in “Search & Rescue”, the focus is on finding and rescuing possible casualties. New since 2021 is the inclusion of UAVs, for which the organisers provide their own scenario. All the performances will be judged by an external jury, which includes Dr Michael Gustmann, Kenneth Pink, Ryan Lamm and Professor Daniel Watzenig, all proven experts in robotics and nuclear technology.

ELROB as the second major event of the FKIE scientists

Planning and organisation keep the FKIE scientists busy for months – even if a certain routine has set in in the meantime. This is not least due to the second major event that the team organises in annual rotation with the EnRicH – in this case with a focus on military robotics: at the European Land Robot Trial (ELROB), participants from all over the world also compete to test the maturity and capabilities of their robotic systems, but this time in military mission scenarios such as convoying, reconnaissance or clearing explosive ordnance.

“ELROB originally emerged from a NATO workshop in 2004,” Schneider reports. Considerable development deficits in military robots had been identified. “We proposed to create a framework that would bring together international experts from the user side, industry and the R&T sector on a regular basis.” All tasks are developed in close consultation with military users and are based on the current and increasingly complex needs of the armed forces. The format is now firmly established: since its premiere in 2006, ELROB has developed into the largest competition of military robotics in Europe. “ELROB and EnRicH are the only events worldwide that currently provide an objective and real picture of the actual state of robotics,” Schneider is convinced.

New scenario is currently being developed

For the next EnRicH in summer 2023, the FKIE scientists are currently working out the new tasks. “In autumn we were in Austria for a few days to take another look at the localities and to consider how to set up the new scenario,” says FKIE staff member Dennis Wildermuth, who has been part of the organising team for many years. In addition to the conception of the task and the complex equipment of the NPP with cameras and radio systems, there is also a high organisational effort, such as maintaining the homepage and staying in contact with the participants. And finally, of course, all the results of the EnRicH have to be scientifically evaluated. But for Wildermuth, it is worth every effort: “All the teams that compete here are super motivated, exchange ideas and compare their solutions,” he says. “The atmosphere on site is really special.“

Organiser Dr Frank E. Schneider is also convinced of the great importance of the robotics hackathon: “The use of robots in large-scale emergencies in the industrial sector is an important and absolutely topical issue. The technical challenges in such operational scenarios, especially in the case of incidents in nuclear facilities, are significantly higher than in industrial manufacturing or autonomous driving, for example,” he says. “And unfortunately they have not been addressed to the necessary extent by robotics research so far. We still have a lot of open issues here.”