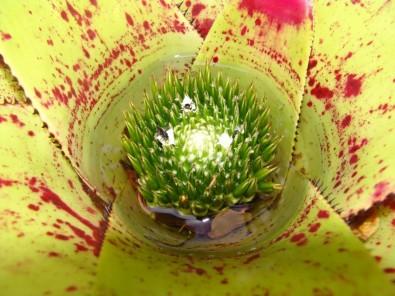 Researchers from six countries in the Americas explored bromeliad microcosms, showing how drought and flood affect the functioning of aquatic ecosystems, especially at the bottom of the food chain
Credit: Gustavo Quevedo Romero / UNICAMP

Researchers from six countries in the Americas explored bromeliad microcosms, showing how drought and flood affect the functioning of aquatic ecosystems, especially at the bottom of the food chain.

To understand how climate change may affect different ecosystems, 27 researchers from Brazil, Argentina, Colombia, Costa Rica, French Guiana and Puerto Rico, among other countries, conducted experiments in seven different locations involving the aquatic environment in the tank (centrally-located water-holding cup) of bromeliads, a habitat for insect larvae and other small organisms.

They discovered that, in contrast with what might be thought, the smallest organisms at the bottom of the food chain suffer the most from rainfall instability, one of the expected effects of climate change, rather than the large organisms at the top. The study was supported by São Paulo Research Foundation – FAPESP, and the findings are published in Nature Communications.

According to ecologist Gustavo Quevedo Romero, first author of the article and a professor in the Animal Biology Department at the University of Campinas’s Biology Institute (IB-UNICAMP) in the state of São Paulo, Brazil, multiple-site studies designed to understand how climate change may affect ecosystems are rare. This type of approach is necessary to achieve a better understanding of how each geographic region and ecosystem will be affected. The findings from the experiments with bromeliads contradict those of much previous ecological research focusing on climate change and species resilience.

“We manipulated the quantity and frequency of rainfall in the microcosms [in the bromeliad tank] according to climate change models for the decades ahead. In the same experiment, we created both drought and flood conditions, as well as an index of hydrological stability in each bromeliad. The sample, therefore, included bromeliads with more stable hydrological conditions, in which water volume varied little over time, and others with more unstable conditions,” Romero said. “We found that hydrological instability affected smaller organisms negatively. The largest amounts of these were found in microcosms with more stable conditions. The largest predators were found in bromeliads exposed to the worst periods of drought.”

The scientific literature suggests larger animals suffer most from climate changes, especially because they have less room to forage. “But we showed that in this case the bottom of the food chain may be more sensitive, and changes there can modify the trophic levels above,” he said.

The researchers were surprised to find a single consistent pattern of susceptibility to climate change across all seven study sites despite local variations: predators always benefited from drier conditions, while small organisms were adversely affected in small environments and favored in larger environments with more rainfall. “Our study sites included Santa Fé, Argentina, which is arid, and locations in Costa Rica and French Guiana where drought is unusual, and the pattern was the same,” he said.

Other results were also geographically consistent. “The predator biomass to prey biomass ratio, or the biomass pyramid representing the amount of potential food available for each trophic level in an ecosystem, was the same in all plants in all study sites and consistent throughout the geographical space regardless of species pool and the degree to which the organisms were drought-adapted,” he said.

The study shows that climate change causes instability in food webs, especially when it is associated with drought. “More predators in a bromeliad with less water intensify the top-down predation effect on prey communities. This destabilizes the food web and may lead to local extinction of both predator and prey species,” Romero said. In sum, although predators benefit in the smaller habitats caused by drought, these environments are more unstable and more vulnerable to extinction and ecosystem collapse.

The study methodology classified the fauna inhabiting bromeliad aquatic ecosystems into apex (top) predators, mesopredators (mid-ranking predators), and detritivores (small animals that feed on dead organic material, especially plant detritus). “We saw no impact of climate change on mesopredators, which were not affected by the treatments we administered,” Romero said. In the bromeliad microcosm analyzed, mid-ranking predators were represented by small insect larvae that feed on other small organisms and are generally considered opportunistic species.

Like detritivores, filter feeders are small organisms. These are aquatic animals that feed on particles or other small organisms strained out of water and circulated through their system. Both of these groups benefited from steady hydrological conditions but were adversely affected by unstable conditions and exceptionally heavy rainfall.

“For example, heavy downpours in lakes and in bromeliad tanks lead to overflowing and loss of microorganisms and other nutrients via flushing,” Romero said. “We showed in other studies that flushing and flooding can lead to significant losses of bacteria, microinvertebrates, and nutrients such as nitrate and phosphate.”

Bromeliads, Romero explained, are natural environments in which scientists are able to explore various aspects of ecosystems, thanks to their small size and the ease with which they can be handled, as well as the fact that the results obtained in them can often be extrapolated for larger systems such as lakes or lagoons. Studies conducted in these larger environments tend to produce similar results to those performed in the bromeliad microcosm.

“Bromeliads are found throughout the Neotropics, and although their tanks are small environments a forest bromeliad community can accumulate as much as 50,000 liters of water per hectare, serving as a water source for birds, mammals and other terrestrial animals, and as an entire ecosystem for organisms that live in aquatic environments,” he said.

This aquatic environment, mainly inhabited by small insects and crustaceans, is what the researchers explored. “The apex predators, especially dragonfly larvae, are larger animals, while the detritivores are tiny insects like mosquitoes and midges,” he explained. “The apex predators feed on these smaller organisms, which feed on particles in suspension and detritus that falls from trees.”

The research group, which also included scientists from France, Canada, the US, and the UK, held two meetings to decide on the experiment design. The same protocol was implemented at all seven study sites. At each site, they selected 30 bromeliads with more than 100?ml of tank capacity so that they could be colonized by the large predators. The species were the most common locally, as each region’s bromeliad community comprises different species.

The 210 plants were washed and disinfected to remove all detritus and macroorganisms, as well as microorganisms such as bacteria and fungi. “We cleaned the bromeliads out very thoroughly so as to start from scratch,” Romero said. “To initiate colonies and communities in the experimental ecosystems, we evenly divided the previously removed fine and coarse detritus among the 30 plants and stocked each bromeliad with the same community in terms of invertebrate families and functional groups. We then took them back into the field and installed them under individual transparent plastic shelters to ensure that the results were not affected by rain.”

Each site’s rainfall regime was simulated in terms of a five-year regional average for volume and frequency. “We manipulated the amount and frequency of rainfall during a two-month period at each site,” Romero said. “We had an average for each geographical region. Below that we considered drought, and above it flooding. We manipulated the extremes, drought, and flood. No one had done that previously.”

After two months the plants were taken to the laboratory, where the researchers recorded water turbidity (organic and inorganic suspended matter resulting from detritivore activity), a surrogate for total nutrient availability in freshwater ecosystems. They then dissected each bromeliad by removing each leaf, washing it separately in running water, and filtering this water through sieves before analyzing its content.

The study was also supported by FAPESP via the project “Global changes and the functioning of ecosystems in phytotelmata“, a PhD scholarship , a postdoctoral scholarship, and a research scholarship abroad.