Home / Ecology, The Environment and Conservation / An exotic grass kills trees by hijacking their water
02.08.2004

An exotic grass kills trees by hijacking their water 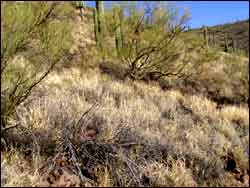 Buffelgrass snatches water away from nearby palo verde trees, ultimately killing them.

Scientists thought deep-rooted plants such as desert trees did not compete with grasses for water. Now researchers from the University of Arizona in Tucson report that buffelgrass, an invasive non-native species, grabs water before foothill palo verde trees can.

The situation does not bode well for the trees, said J. Alex Eilts, a doctoral candidate in UA’s department of ecology and evolutionary biology. Native to the Sonoran desert, foothill palo verde trees, or Cercidium microphyllum, cope with drought by shedding branches to reduce the amount of water needed to survive. “It’s as if the trees are self-pruning themselves to death,” he said.

Eilts will give his presentation, “Effects of a non-native grass on a dominant woody Sonoran desert tree,” at 9:50 a.m. on Thursday, Aug. 5 in the Oregon Convention Center in Portland, Ore., at the annual meeting of the Ecological Society of America. His coauthor, Travis Huxman, is an assistant professor in UA’s department of ecology and evolutionary biology.

Buffelgrass, or Pennisetum ciliare, thrives in arid and semi-arid climates. Ecologists are increasingly concerned about buffelgrass, a native of Africa often introduced for livestock grazing or to control erosion, because it spreads quickly and outcompetes native species. Buffelgrass now is found in Texas, New Mexico, Arizona, Mexico, Venezuela, Argentina, Hawaii and Australia.

First planted in the Tucson area shortly before 1940, the exotic grass now is found in the Tucson Mountains, on A Mountain and on nearby Tumamoc Hill, home of UA’s century-old Desert Laboratory. Researchers believe that buffelgrass first invaded the laboratory grounds in the mid-1980s.

One focus of the laboratory is long-term research on the ecology of Sonoran desert plants. While working on a class project, Eilts noticed that, unlike other parts of the laboratory grounds, there were almost no palo verde trees within the patches of buffelgrass.

Historic photographs taken by Ray Turner of the U.S. Geological Survey showed foothill palo verde trees on the laboratory grounds in locations which now have only buffelgrass. Such trees can live more than 100 years, so Eilts suspected that buffelgrass had something to do with the palo verdes’ disappearance.

To study how buffelgrass affects the trees, Eilts used an instrument called a pressure chamber to find out how much water stress the trees were experiencing. First he tested foothill palo verde trees surrounded by buffelgrass. The next year, he removed the grass from under some of those trees and repeated the experiments. Removing the buffelgrass significantly reduced the trees’ water stress.

The grass is reducing the water available to the trees, he said. “This means that in any given year the water deficit experienced by the trees with grass at their bases is greater compared with those trees free of the influence of buffelgrass.”

Eilts also measured how much of their branches the trees shed.

Palo verdes self-prune little during an non-drought year, said Huxman. But when times are tough, buffelgrass makes it tougher. Eilts found that in a drought year, trees surrounded by buffelgrass lost about 24 percent of their total branches, whereas trees free of buffelgrass shed only about 16 percent. Huxman said, “Buffelgrass takes the drought and accentuates it.”

The ecologists’ findings contradict current hypotheses about the relationship between trees, grasses and water in arid climates. Eilts said, “One would predict that the presence of buffelgrass would have the least affect on the deep-rooted woody plants such as the palo verde trees.”

Instead, the buffelgrass reduces water available to the trees’ deep roots. “Effectively, what is happening to the trees in the grass is that they are experiencing a biotically induced drought,” he said. “They seem to be responding to this the same way they do to normal drought, by self-pruning.” Eilts said there is no reason why the grass couldn’t affect other plant species in a similar manner. He said, “What makes buffelgrass a potential threat to the foothill palo verdes and other native plants is that it can move into undisturbed habitats and effectively compete for water.”