Home / Ecology, The Environment and Conservation / Lakes with zebra mussels have higher levels of toxins
11.03.2004

Lakes with zebra mussels have higher levels of toxins 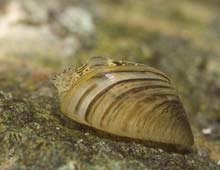 Inland lakes in Michigan that have been invaded by zebra mussels, an exotic species that has plagued bodies of water in several states since the 1980s, have higher levels of algae that produce a toxin that can be harmful to humans and animals, according to a Michigan State University researcher.

In a paper published in the recent issue of Limnology and Oceanography, Orlando “Ace” Sarnelle, an associate professor in MSU’s Department of Fisheries and Wildlife, and colleagues report that lakes that are home to zebra mussels have, on average, three times higher levels of a species of blue-green algae known as Microcystis.

Those same lakes also have about two times higher levels of microcystins, a toxin produced by the algae.

“If these blooms of blue-green algae are a common side effect of zebra mussel invasion, then hard-fought gains in the restoration of water quality may be undone,” Sarnelle said. “Right now, it appears that the numbers of blooms in Michigan have been increasing and appear to be correlated with the spread of zebra mussels.”

Initially, water samples were taken from nearly 100 inland lakes in Michigan’s Lower Peninsula, ranging from Benzie County in the northwest to Oakland County in the southeast, that had established zebra mussel populations.

Follow-up experiments by Sarnelle and colleagues in west Michigan’s Gull Lake showed that zebra mussels are indeed the cause of the increase in toxic algae.

There have been documented cases in which animals, including cattle and dogs, died after drinking water with high levels of microcystins. The toxin is also believed to be responsible for liver damage in humans.

Surprisingly, zebra mussels seem to have no effect on the amount of blue-green algae in lakes with high levels of phosphorus, a nutrient that builds up in lakes and other bodies of water as a result of erosion, farm run-off and human waste.

In contrast, zebra mussels cause an increase in toxic Microcystis in lakes with low to moderate levels of phosphorus, anywhere between 10 and 25 micrograms per liter. Such lakes are not normally expected to have very many blue-green algae, Sarnelle said.

Zebra mussels have been causing problems in the Great Lakes since the late 1980s. For example, in Lake Erie, Sarnelle said, increased incidence of blue-green algae blooms have been reported since the establishment of zebra mussels.

“Similarly, data from the Bay of Quinte in Lake Ontario show a dramatic increase in the biomass of Microcystis after zebra mussel establishment,” he said. “In addition, toxic algal blooms in Saginaw Bay and Lake Erie are disturbing because they come after many years of expensive reductions in nutrient loading to improve water quality.”

Zebra mussels, which are native to the Caspian Sea region of Asia, were first discovered in Lake St. Clair in 1988. It’s believed they were transported to the Great Lakes via ballast water from a transoceanic vessel.

Since then, they have spread to all of the Great Lakes, as well as many other U.S. and Canadian inland lakes and rivers.

Sarnelle’s co-authors on the paper are Alan Wilson of the Georgia Institute of Technology, and David Raikow and Stephen Hamilton of the MSU Department of Zoology and Kellogg Biological Station.