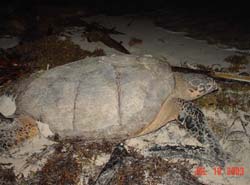 Poaching of a critically important population of endangered hawksbill sea turtles along the coast of Nicaragua has dropped by more than 79 percent, thanks to a unique program developed by the Bronx Zoo-based Wildlife Conservation Society that enlists support from local communities, fishing groups, and government agencies.

Over a four-year period, the practice of illegally removing turtle eggs from nests has dropped from nearly 100 percent on several islands known as the Pearl Cays, to approximately 21 percent during 2002, according to the researchers, who published their results in the latest issue of the journal Chelonian Conservation and Biology.

“The Pearl Cays Hawksbill Conservation Project demonstrates how important local partners can be in protecting an endangered species such as the hawksbill turtle,” said WCS scientist Dr. Cynthia Lagueux, who has conducted research on turtle populations along the Nicaraguan coast for more than a decade. “Beach surveys and active protection of females and their eggs can make a difference for the survival of this endangered species in this part of the Caribbean.”

Weighing up to 200 pounds with a shell some 3 feet in length, the hawksbill turtle has vanished from many areas of its former range around the world. It is hunted for food, eggs and its valuable shell, which is commercially sold as “tortoise-shell” for use in eyeglass frames, hairbrushes, and a host of other fashion items. The species is listed as “critically endangered” by the World Conservation Union (IUCN). Further, hawksbill turtles are listed under Appendix I in the Convention on International Trade of Endangered Species (CITES), which bans all international trade.

The project’s engagement of local communities and government bodies started back in 2000, with meetings of nine communities with fishermen known to use the Pearl Cays area. These meetings provided the residents with biological information on hawksbills along with the results of their 1999 surveys. This in turn helped convince local people that losing all turtle eggs would eventually result in the species demise. Community leaders in support of the protecting the turtles were asked to sign a petition, while radio spots, written and performed by coastal residents, promoted the need to conserve hawksbill turtles and support the Pearl Cays Hawksbill Conservation Project.

While recent conservation efforts and educational outreach have been effective in increasing the number of hatchlings produced in the Pearl Cays, other threats have emerged, particularly habitat degradation of nesting islands by private individuals. The construction of buildings and other structures near or on beaches used by hawksbills destroys the vegetation and other conditions needed for successful reproduction.

“While we’ve enjoyed success in bringing more hawksbill turtles into the world, we also need to counteract threats to the habitats on which the species relies for reproduction,” added Lagueux. “A management plan is needed to keep development away from these critical sites.”