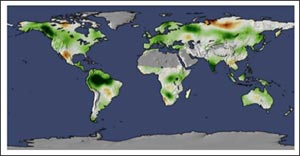 <b>Global change in NPP</b> <br>Between 1982 and 1999, the climate became warmer, wetter, and sunnier in many parts of the world. These changes increased the overall productivity of land plants by 6 percent. This map shows productivity increases during the time period in green, while decreases are shown in brown. Productivity, which is the net uptake of carbon, increased the most in tropical regions, where climate change resulted in fewer clouds and more sunlight. <br>Credit: NASA Earth Observatory <br>

A NASA-Department of Energy jointly funded study concludes the Earth has been greening over the past 20 years. As climate changed, plants found it easier to grow.

The globally comprehensive, multi-discipline study appears in this week’s Science magazine. The article states climate changes have provided extra doses of water, heat and sunlight in areas where one or more of those ingredients may have been lacking. Plants flourished in places where climatic conditions previously limited growth.

“Our study proposes climatic changes as the leading cause for the increases in plant growth over the last two decades, with lesser contribution from carbon dioxide fertilization and forest re-growth,” said Ramakrishna Nemani, the study’s lead author from the University of Montana, Missoula, Mont.

From 1980 to 2000, changes to the global environment have included two of the warmest decades in the instrumental record; three intense El Niño events in 1982-83, 1987-88 and 1997-98; changes in tropical cloudiness and monsoon dynamics; and a 9.3 percent increase in atmospheric carbon dioxide (CO2), which in turn affects man-made influences on climate. All these changes impact plant growth.

Another co-author, Charles Keeling, Scripps Institution of Oceanography, La Jolla, Calif., cautions no one knows whether these positive impacts are due to short-term climate cycles, or longer-term global climate changes. Also, a 36 percent increase in global population, from 4.45 billion in 1980 to 6.08 billion in 2000, overshadows the increases in plant growth.

Nemani and colleagues constructed a global map of the Net Primary Production (NPP) of plants from climate and satellite data of vegetation greenness and solar radiation absorption. NPP is the difference between the CO2 absorbed by plants during photosynthesis, and CO2 lost by plants during respiration. NPP is the foundation for food, fiber and fuel derived from plants, without which life on Earth could not exist. Humans appropriate approximately 50 percent of global NPP.

NPP globally increased on average by six percent from 1982 to 1999. Ecosystems in tropical zones and in the high latitudes of the Northern Hemisphere accounted for 80 percent of the increase. NPP increased significantly over 25 percent of the global vegetated area, but decreased over seven percent of the area; illustrating how plants respond differently depending on regional climatic conditions.

Climatic changes, over approximately the past 20 years, tended to be in the direction of easing climatic limits to plant growth. In general, in areas where temperatures restricted plant growth, it became warmer; where sunlight was needed, clouds dissipated; and where it was too dry, it rained more. In the Amazon, plant growth was limited by sun blocking cloud cover, but the skies have become less cloudy. In India, where a billion people depend on rain, the monsoon was more dependable in the 1990s than in the 1980s.

NASA’s Earth Science Enterprise is committed to studying the primary causes of the Earth system variability, including both natural and human-induced causes.