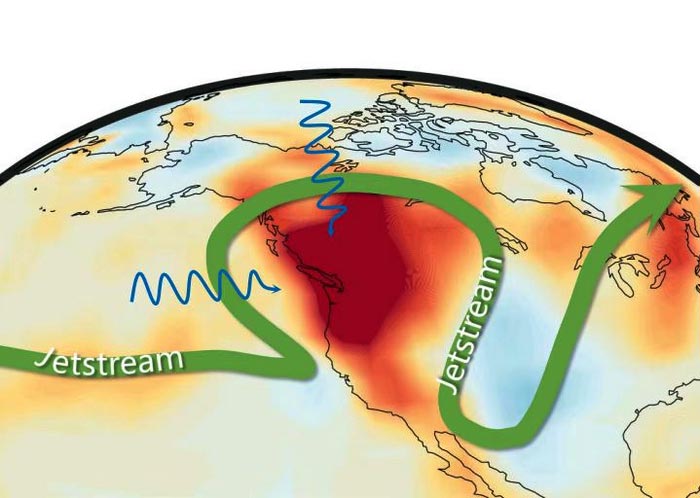 Shading represents surface air temperature anomalies, and the green vector denotes jetstream (a narrow band of very strong westerly air currents near the altitude of the tropopause). Two blue vectors indicate that the heatwave is related to anomalous circulations in the North Pacific and the Arctic.
Credit: Jiayu Zheng

July 19 was the hottest day ever recorded in the United Kingdom, with temperatures surpassing 40 degrees Celsius (about 104 degrees Fahrenheit). The heatwave serves as an early preview of what climate forecasters theorized will be typical summer weather in the U.K. in 2050. The heat continues across Europe today, as well as in the United States, where more than a third of the country is under heat warnings.

The temperatures harken back to just over a year ago when nearly 1,500 people died during a late June heatwave that more than doubled average temperatures in the United States and Canada.

Yes, according to the latest analysis of the atmospheric circulation patterns and human-caused emissions that led to the 2021 heatwave in North America. The findings, published on July 22 in Advances in Atmospheric Sciences, may also explain the U.K.’s current heatwave.

The research team found that greenhouse gases are the primary reason for increased temperatures in the past and will likely continue to be the main contributing factor, with simulations showing that extreme heatwave events will increase by more than 30 percentage points in the coming years. Most of that increased probability is the result of greenhouse gases, according to their results.

“An extraordinary and unprecedented heatwave swept western North America in late June of 2021, resulting in hundreds of deaths and a massive die-off of sea creatures off the coast as well as horrific wildfires,” said lead author Chunzai Wang, a researcher in the Southern Marine Science and Engineering Guangdong Laboratory and head of the State Key Laboratory of Tropical Oceanography at the South China Sea Institute of Oceanology, Chinese Academy of Sciences (CAS).

“In this paper, we studied the physical processes of internal variability, such as atmospheric circulation patterns, and external forcing, such as anthropogenic greenhouse gases.”

Atmospheric circulation patterns describe how air flows and influences surface air temperatures around the planet, both of which can change based on natural warming from the Sun and atmospheric internal variability, as well as Earth’s rotation. These configurations are responsible for daily weather, as well as the long-term patterns comprising climate. . Using observational data, the researchers identified that three atmospheric circulation patterns co-occurred during the 2021 heatwave: the North Pacific pattern, the Arctic-Pacific Canada pattern and the North America pattern.

But atmospheric circulation patterns can co-occur — and have before — without triggering an extreme heatwave, so how much was the 2021 event influenced by human activities? Wang and the team used the internationally curated, tested and assessed models from the World Climate Research Programme, specifically the Detection Attribution Model Comparison models of the Coupled Model Intercomparison Project Phase 6 (CMIP6).

“From the CMIP6 models, we found that it is likely that global warming associated with greenhouse gases influences these three atmospheric circulation pattern variabilities, which, in turn, led to a more extreme heatwave event,” Wang said. “If appropriate measures are not taken, the occurrence probability of extreme heatwaves will increase and further impact the ecological balance, as well as sustainable social and economic development.”

Other contributors include co-corresponding author Jiayu Zheng and two students from the University of CAS: Wei Lin and Yuqing Wang.