Home / Ecology, The Environment and Conservation / Comparing nutrient pollution: the Indian Pamba River and the Weser
04.12.2015

Comparing nutrient pollution: the Indian Pamba River and the Weser 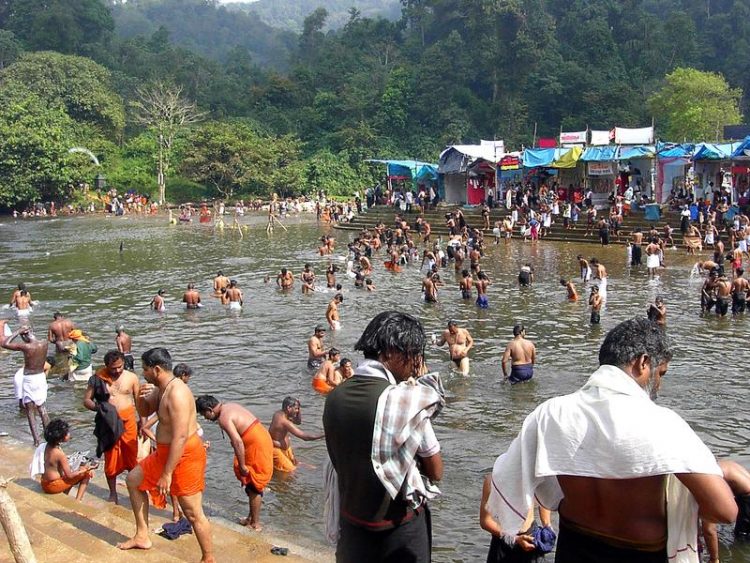 Pilgrims bathing in the Pamba river at the Sabarimala Temple, one of the largest pilgrimages on earth. Tim Jennerjahn, Leibniz Center for Tropical Marine Ecology

Researchers from the Leibniz Center for Tropical Marine Ecology (ZMT) have conducted measurements in a densely populated river basin in India. Besides agricultural use of the hinterland, there is another prominent reason of water pollution: the largest pilgrimage on earth – the Sabarimala Temple. During their studies the ZMT researchers made a surprising discovery – the Pamba River in the Indian state of Kerala is less contaminated by nutrients than, for example, the German Weser River.

A high population density, untreated sewage, use of fertilisers on farmland: Southeast Asian rivers are highly contaminated with nutrients such as nitrogen and phosphorus. During the monsoon season torrential rains wash large quantities of pollutants into the rivers. Data about ocean pollution caused by riverine input are plentiful in industrial nations, but are still rare in developing and emerging countries.

Dr. Tim Jennerjahn, a biogeochemist at the ZMT, and his PhD student Shilly Elizabeth David looked at the contamination of the Pamba River in the southern Indian state of Kerala, which has a population of more than 33 million. The results of their study have just been published in the journal “Science of the Total Environment”.

The Pamba River with a length of 176 km rises in the Western Ghats mountains, flows through the Kerala State and discharges into the Vembanad lake which, in turn, provides the connection to the Arabian Sea. An average of 400 people live within one square kilometre of land in the river catchment.

The ZMT scientists tested different sections of the river characterized by specific land uses like tea and rubber plantations, settlements with horticulture, rice crops and the pilgrimage site of the Sabarimala Temple. More than 50 million Hindus from all over the world flock to the sanctuary each year. Every day countless pilgrims take a bath in the Pamba to wash away their sins.

“Near the Sabarimala Temple we found large quantities of ammonium nitrogen as a result of human waste. We measured 3.1 kg per hectare and year,” says Tim Jennerjahn. “Close to the pilgrimage site the phosphorus load from detergents was also high.” With 5.6 kg per hectare and year the concentration of nitrate nitrogen resulting from fertilisers used in plantations and gardens was also considerable in the corresponding sections of the rivers.

“It has still come as a bit of a surprise to us that the nutrient load in such a densely populated area is lower than in German rivers such as the Weser, for example,” says Dr. Jennerjahn. “Lower-Saxony has a problem with manure, too much of it is washed from the fields into the Weser.”

While the Weser carries an average nitrogen load of 12 kg per hectare and year, the Pamba only contains 3.5 kg on average. In the Vembanad lake, forming the estuary of the Pamba, the concentration of nutrients is even lower, because abundant water hyacinths absorb nutrients, hence to some extent serve as ‘sewage treatment plants’.

“Our study highlights the importance of collecting further data on a local scale that take into account different types of land use, especially in densely populated tropical river catchments,” stresses Tim Jennerjahn. “Only then global trends can be ascertained on the one hand and region-specific measures can be taken to sustain healthy waters on the other hand.”