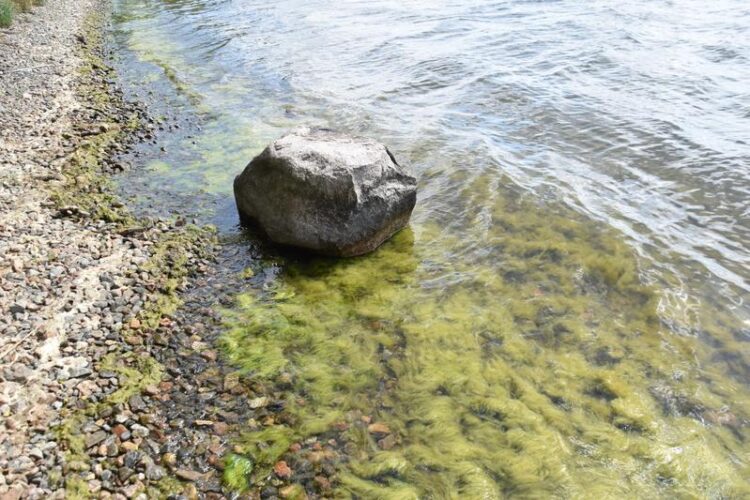 They are green, slimy and sometimes also dangerous: anyone walking along the shores of lakes often finds carpets of filamentous algae, which are increasingly appearing even in previously nutrient-poor and clear lakes.
(c) Sabine Hilt

Many of the world’s clear lakes are affected by a new phenomenon: At the shore, where people play or swim, the lake bottom is covered with green carpets of algae. These are mass accumulations of filamentous algae that have recently appeared even in remote mountain lakes as well as in some large lakes such as Lake Tahoe (USA) and Lake Baikal (Russia). An international group of lake researchers from different institutions, including the Leibniz Institute of Freshwater Ecology and Inland Fisheries (IGB), has drawn attention to the problem and has compiled possible reasons. Because filamentous algae blooms change the ecosystem profoundly and can cause problems for water use.

In a recent publication, a team of researchers from all over the world has compiled the possible triggers for the observed mass development of benthic filamentous algae in clear lakes. They discussed local and global influences: increasing nutrient inputs, the loss of filamentous algae-eating aquatic animals, climate change, high nutrient loads and invasive species.

Little is known about the ecological impact; there are risks for recreational users

Filamentous algae are not a single species; many different species are grouped under this term because of their appearance. Mass accumulations of filamentous algae can threaten lake benthic communities and alter food webs, but researchers do not yet know the multiple impacts. For recreational users, benthic filamentous algae proliferations are not only unsightly – toxins from cyanobacteria can also accumulate in them. Dogs may be attracted by the fishy smell of the algae and run the risk of ingesting the toxins. “In Germany, too, there are problems with mass developments of benthic filamentous algae on some lakes,” said IGB researcher Dr. Sabine Hilt, co-author of the study.

Until now, mass developments of algae were mainly a phenomenon in lakes with high inputs of nitrogen and phosphorus. These nutrients mostly enter water bodies via agriculture or urban runoff and facilitate benthic algae growth. In clear and nutrient-poor lakes, benthic algae usually grow slowly and are typically occurring in deeper zones. “We are surprised that lakes that we as ecologists hardly had to worry about before are now affected by benthic filamentous algae blooms in the shallow zones,” expressed Sabine Hilt.

Filamentous algae have a higher nutrient demand, especially for nitrate and ammonium, than the smaller, slow-growing species they replace. In fact, in some formerly clear and nutrient-poor lakes, nutrient loading has increased in recent years. One example is Lake Baikal in Siberia – known for its unparalleled richness of animal and plant species. This biodiversity is threatened because the biomass of benthic filamentous algae has increased fivefold in the last ten years. One possible reason is nitrogen and phosphorus inputs from untreated human sewage discharged into the lake. Forest fires have also caused additional nutrient loading to the lake.

Lead author Dr. Yvonne Vadeboncoeur, a professor at Wright State University in the US, is concerned that the widespread use of pesticides or other stressors are killing small animals in the water. This process could also contribute to benthic filamentous algae spreading instead of being eaten by grazers.

Another author of the study, Dr. Sudeep Chandra of the American University of Nevada, pointed out that benthic filamentous algae are appearing in clear mountain lakes in the western US because water temperatures are rising and summers are getting longer. In Lake Tahoe, the increased occurrence of extensive benthic algal blooms in shallow waters is linked to shorter ice coverage and changes in subsurface water flow associated with climate change. Various indirect effects, e.g. on the structure of food webs, are often stronger in their impact than the changes caused directly by temperature.

Citizens could be helpful in monitoring

“Our review study suggests that multiple environmental stressors influence the phenomenon. However, we still know far too little about where and to what extent filamentous algae proliferate. For most long-term studies, water samples are taken in the middle of the lake and analysed for plankton, while nearshore areas have been less in the focus so far. This has to change. However, monitoring benthic filamentous algae is complex because their occurrence can be heterogeneous in space and time. Therefore, laymen researchers – citizen scientists – who share their observations via mobile phone could be helpful. The use of remote sensing methods will also certainly gain in importance,” was Sabine Hilt’s outlook.

About the Leibniz Institute of Freshwater Ecology and Inland Fisheries (IGB):

The Leibniz Institute of Freshwater Ecology and Inland Fisheries, IGB, is an interdisciplinary research centre dedicated to the creation, dissemination, and application of knowledge about freshwater ecosystems. Working in close partnership with the scientific community, government agencies, as well as the private sector, guarantees the development of innovative solutions to the most pressing challenges facing freshwater ecosystems and human societies. https://www.igb-berlin.de/en