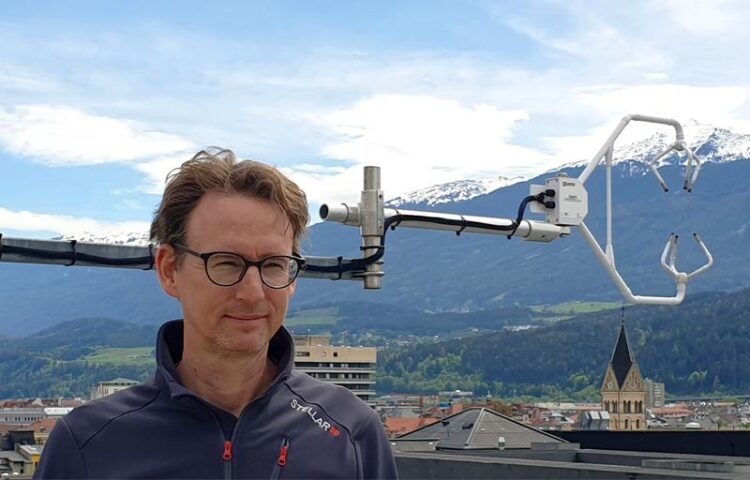 Long-term measurements in the urban area of Innsbruck, Austria, show that the fraction of ozone near the surface tends to be overestimated in atmospheric models.

Consequently, a fundamental assumption for air quality forecasting has to be reinterpreted for urban areas. Measurements by an international team led by atmospheric scientist Thomas Karl of the University of Innsbruck also show that direct nitrogen dioxide emissions are overestimated.

The 40-meter-high monitoring tower of the Innsbruck Atmospheric Observatory near the city center of Innsbruck in Austria, Europe, continuously provides data on the composition of the atmosphere near the surface. Every hour, 36,000 data points are recorded. Using a special measuring method – the so-called eddy covariance method – the concentration of air components can be continuously monitored. An international team led by Thomas Karl from the Department of Atmospheric and Cryospheric Sciences at the University of Innsbruck has now used these data to study the chemistry of ozone, nitrogen monoxide and nitrogen dioxide in urban areas in detail. The high proportion of diesel vehicles in European cities leads to strong concentrations of nitrogen monoxide. This reacts with ozone to produce nitrogen dioxide. In the atmosphere, nitrogen dioxide decomposes again to nitrogen monoxide and atomic oxygen, which immediately combines with atmospheric oxygen to form ozone.

Common assumption needs to be refined

This chemical cycle was described mathematically over 60 years ago in the first air pollution textbook by Philip Leighton. The relationship between the two processes has since been referred to as the Leighton ratio. Computer models of atmospheric chemistry use the Leighton ratio to minimize complexity by deriving the concentration of ozone, nitric oxide, and nitrogen dioxide from the concentration of each of the other two. In practice, this has been used, for example, to derive ozone concentrations in areas polluted by nitrogen oxides. The Innsbruck atmospheric researchers’ data now show that in the presence of high nitrogen monoxide emissions, computational simplifications made by Leighton lead to incorrect results. Thomas Karl points out that “in cities with high nitrogen monoxide emissions, this ratio can be overestimated by up to 50 percent, which can lead to model calculations overestimating ground-level ozone concentrations in urban areas.” The effect of chemistry – turbulence interactions plays a significant role in the lowest layer of the atmosphere, up to 200 meters above the ground.

Responsible for the effect studied in Innsbruck is the combination of strong turbulence in urban areas in the presence of high nitrogen monoxide emissions. . The mixing of the gases combined with the relatively rapid chemical processes lead to more ozone being converted into nitrogen dioxide. The researchers’ data also show that direct emissions of nitrogen dioxide from urban traffic are largely negligible in comparison to secondary formation. “It remains important to note that environmental regulations do not rely on model calculations but come into effect depending on actual measured pollutant concentrations,” Thomas Karl emphasized.

The results have now been published in Science Advances. The research was conducted jointly with the National Center for Atmospheric Research (USA), Case Western Reserve University (USA), Wageningen University (NL) and Luftblick (AT), and was financially supported by the Austrian Science Fund FWF and the European Space Agency ESA, among others.